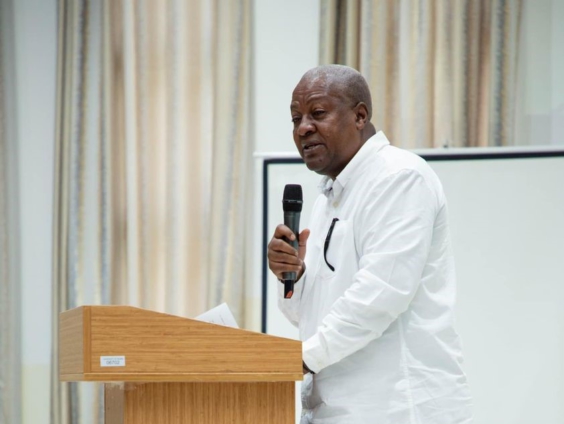 He has described the verdict by the Court as “shocking but not surprising.”

According to him, the Wednesday ruling was “an unfortunate interpretation for convenience that sets a dangerous precedent of judicial interference in parliamentary procedure for the future.”

The Supreme Court presided over by Justice Jones Dotse ruled that a Deputy Speaker can be counted during the formation of a quorum for parliamentary decision-making and participate in voting while presiding over the parliamentary business.

A unanimous 7-0?
Shocking but not surprising.

An unfortunate interpretation for convenience that sets a dangerous precedent of judicial interference in Parliamentary procedure for the future. pic.twitter.com/mKesTDcBNR

The landmark judgement was given after private legal practitioner, Justice Abdulai, filed a case against the Attorney- General to contest the First Deputy Speaker Joseph Osei-Owusu’s decision to count himself during a vote to approve the 2022 budget.

But Mr Mahama believes the 7-0 ruling affects the independence of the legislative arm of government and may affect future deliberations in the House.

Justice Abdulai had also asked the Supreme Court to interpret Articles 102 and 104 of the 1992 Constitution and declare the action of Mr Osei-Owusu as unconstitutional.

Subsequently, the Court struck down Order 109(3) of the Standing Orders of Parliament and described it as unconstitutional.

The Minority in Parliament has described the ruling of the Court as politically motivated and one-sided.

Minority Chief Whip, Muntaka Mubarak, says the position of the Supreme Court is an “attack on the legislature.”

Speaking on Joy FM’s Top Story on Wednesday, he said the Minority will, within one month, seek a review of the ruling by the Court.

Also, the Ningo-Prampram MP, Sam George, has asserted that the Minority in Parliament will employ any legal means within parliamentary procedure to stop the Deputy Speaker from voting when presiding over proceedings of the House.

According to Sam George, the Supreme Court’s judgment is an illegality.

“I deem it an illegality which would be that the person presiding in the House will take part in the vote he is superintending over,” he has said.

Meanwhile, the Minority Leader, Haruna Iddrisu has described the ruling as a travesty of justice.

Speaking on the Joy FM’s Midday News on Wednesday, he said, “this ruling of the Supreme Court, we are not surprised, but we are utterly disappointed in the Supreme Court which is determined to support a struggling President with an ailing economy.”

“This ruling of the Supreme Court can as best be described as judicial support for e-levy…to set aside Parliament standing orders, is a serious travesty of parliamentary justice,” he said.

First Deputy Speaker, Joseph Osei-Owusu has welcomed the ruling by the Supreme Court, describing it as “refreshing.”

Addressing the media in Parliament on Wednesday, he said the decision affirms his earlier move to join his colleagues on the Majority side to approve the 2022 Budget while presiding over proceedings of the House.

According to him, the decision by the Supreme Court would help guide their practice as Members of Parliament and advance Ghana’s democracy.

“As at now, at the end of it all, we are being guided. What we have not done before, where the way was not clearly marked out by our own standing orders, have now been cleared by the Supreme Court,” he stated.

The Majority Chief Whip, Frank Annoh-Dompreh, says the Minority Leader’s comments about the Supreme Court’s ruling that Deputy Speakers can vote while presiding is strange and must be disregarded.

He says Haruna Iddrisu “could have spoken more responsibly, knowing him for his intelligence and experience in governance.”

The commentary coming from the Minority Leader in the wake of the Supreme Court’s ruling is unfortunate and misguided. I believe he could have spoken more responsibly, knowing him for his intelligence & experience in governance.

He & people who think like him should spare us 1/2 pic.twitter.com/bMIhVB9Iz8

“The commentary coming from the Minority Leader in the wake of the Supreme Court’s ruling is unfortunate and misguided. He and people who think like him should spare us the ill-intentioned complaints and respect due process.”

“Where were these comments from him when the same Supreme Court ruled to uphold Mr Mahama’s election as President?” Annoh-Dompreh quizzed.

DISCLAIMER: The Views, Comments, Opinions, Contributions and Statements made by Readers and Contributors on this platform do not necessarily represent the views or policy of Multimedia Group Limited.
Tags:
Deputy Speakers in Parliament
John Mahama
Supreme Court