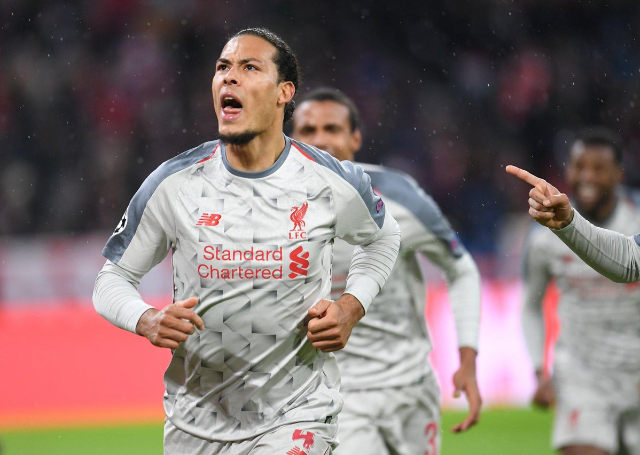 In modern day football, the influence of centre backs has been downplayed. Probably due to the upsurge in attacking talents all over the world. However, there has been a resurgence for centre backs this season in the red side of Merseyside, a resurgence initiated by one man, 6 feet 4 inches tall yet so fast, his name? Virgil Van Dijk.

After a world-class performance in the Champions League against German giants Bayern Munich, the question as to whether Van Djik is the best defender in the world has resurfaced. Liverpool’s record signing scored his first Champions League goal against Bayern Munich as he also provided an assist on the night for Sadio Mane.

Beyond the game at Allianz Arena last night, Van Dijk has been so influential in Liverpool’s defensive setup after signing for £75million.

In 41 games in the league and in Europe, not a single player has dribbled past the 27-year-old.

Former Liverpool center back Phil Babb who made over 150 appearances for Liverpool said Van Djik is currently the best defender in the world.

“Well he is still in the prime of his career and you normally term someone as great at the end of his career but right now I would say he is the best central defender in world football. What he has done to Liverpool since he joined has been sensational,” Babb told Joy Sports while in Ghana for the 2019 Standard Chartered Trophy tournament.

According to FourFourTwo, since the Dutchman’s debut in 2018, no Premier League side has kept more clean sheets than the Reds (23). Van Dijk's influence on the Liverpool defence has been impressive as he has helped other players improve.

Phil Babb added, “he’s not only galvanized that defence but he has made other players better, look at the likes of Andy Robertson, Trent Alexander Arnold, and Joe Gomez who started the season alongside him has excelled alongside Virgil Van Dijk. Virgil has talked to him, controlled him, teaching him the nuisances of positioning and communication. To have someone with that sort of presence is amazing. I don’t think anyone in the modern era at Liverpool has had such an influence.”

Phil Babb whose performances for Ireland at the 1994 World Cup helped persuade then Liverpool manager Roy Evans to pay a record transfer fee to secure his services also compared Van Djik’s influence to that of Sammy Hypia.

“I think the only centre half that I can think of that has had such an effect will be Sammy Hypia. When Sammy came to Liverpool, we started winning trophies again in the next couple of seasons. He had such a huge influence on the back four and Virgil Van Dijk is having the same. Virgil’s influence goes beyond the back four, if the midfield and attacking players are not being good enough, Virgil lets them know. So he is such an important player to Liverpool.”

Do you think he is currently the best defender in the world? Click to vote.