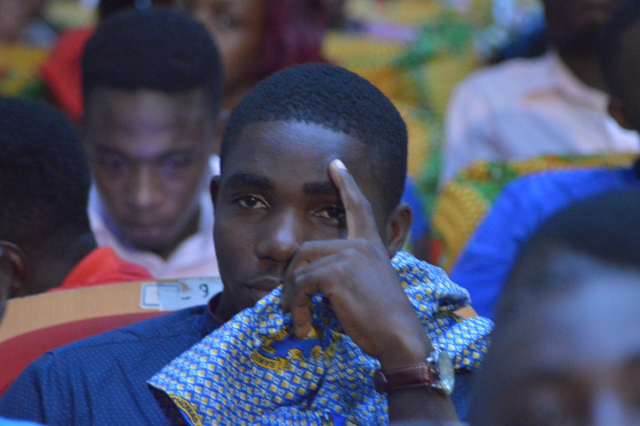 If anything has proven useful to contestants of Prempeh College at the 2017 National Science and Maths Quiz, it is experience.

Prempeh has proven that there is magic in old hands.

It initially started as a two horse race between Prempeh College and St Thomas Aquinas while the third which is the reigning champion in the 2016 competition, Adisadel College went on a self-destruction mode.

If you're in a hurry for the final result here it is:

Adisadel College was at its weakest throughout the competition that it begs asking if it was the same school that won the competition last year. But the explanation is not far-fetched.

Prempeh College had wonders in one of its contestants Wonder. The students of the Kumasi school situated at Sofoline proved that English is not the determiner of the winner but one's ability to answer the questions correctly.

Meet the magicians from Prempeh College

It was a fully packed auditorium at the National Theatre Thursday, as old students of the three schools thronged the venue in huge numbers.

If God had been an Old Thom these contestants would have won the contest but He isn't.

Students of Adisadel College sat on thorns as the five rounds glided by as if they were on a free fall.

Before the competition begun, students of Prempeh College were in joyous mood as they were not ready to entertain fears.

The Deputy Education Minister, Barbara Ayisi Acher was there to speak on behalf of the Minister, Dr Matthew Opoku Prempeh. She attested to 'intimidating' atmosphere in the auditorium.

The old students of Prempeh College

Isn't she gorgeous? She could have passed for a Beauty Queen. Yes she is…the beauty queen of the NSMQ 2017 final.

NSMQ Quiz Mistress, Dr. Elsie Effah Kaufmann was spectacular and splendid. The success of the NSMQ 2017 could be ascribed to her stellar leadership on the stage.

When she administered the last set questions for the fifth round she beamed a smile but it was short lived. Adisadel College was once again trailling. But St Thomas Aquinas closed in on Prempeh College contestants.