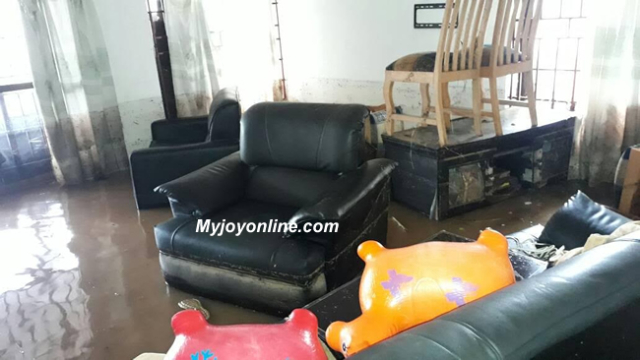 Heavy rains that started around 8:00 p.m. Monday evening flooded many parts of Accra, leaving residents of the city in devastation as the flood waters recede Tuesday morning.

The rains persisted till 3:00 a.m. Tuesday morning when it started to subside.

The Ghana Meteorological Agency has, meanwhile, announced Tuesday that there will be more rains later in the day.

Active social media users took to Facebook and Twitter to give updates about the flooding situation at their locations as they struggle to get through to emergency service providers without success.

Olivia Mireku, a resident of Taifa Cocoa Powder, a suburb of Accra, was compelled to phone into Joy FM's Late Night Express, not to request a love song, but to narrate a distressing account of the chaos the flooding was creating in her area.

"The situation is very critical…A lot of building are covered with the flood. People are just shouting…you can't rescue anyone," she narrated from her room on the third floor.

The rooms of her neighbours on the first floor have been totally inundated with flood waters, she stated.

Olivia sent these photos to Myjoyonline.com:

On Tuesday morning, Deputy National Coordinator of the National Disaster Management Organisation (NADMO), Abu Ramadan, told Joy News a cursory assessment of the flood situation shows that extent of the devastation was "enormous".

He said although more rains are expected Tuesday morning, he was hopeful that there will not be more flooding.

According to him, an Emergency Response Unit comprising a team of national security operatives and NADMO officials to respond swiftly to distress calls.

Abu Ramadan said NADMO assessment Tuesday also revealed the flood was caused by man-made activities: choked drains that have come about as a result of the poor disposal of rubbish.