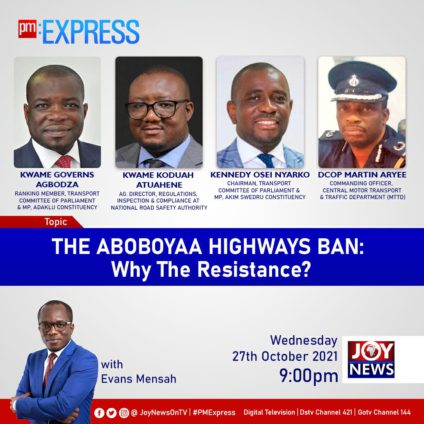 The ban on tricycles, widely known as ‘aboboyaa’ on Accra’s Highways is expected to take effect from November 1, 2021.

According to the Regional Minister, the major place of concern for the exercise is the Tema Motorway.

But the Minority in Parliament has described as unconstitutional attempts to ban the use of tricycles on the highways.

They argue that there are no laws in the country that support the move; adding that it is not within the purview of the national road safety authority and the ministry of transport.

Ranking Member on the Roads and Transport Committee, Governs Kwame Agbodza has noted that these tricycles, especially the ones that ply the Tema Motorway, carry refuse from households to Tema where there are recycling plants because there are hardly any in other parts of the city.

Tonight on JoyNews, PM Express looked at the ban and the recent concerns registered by the Minority.