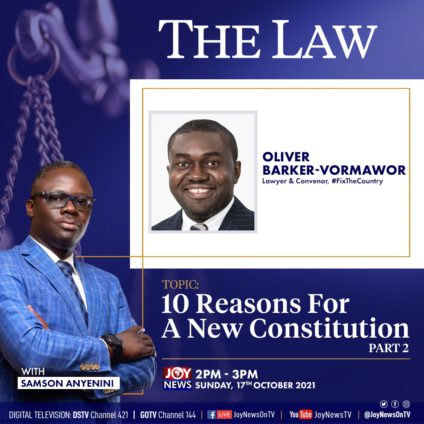 Last week, discussions on “10 reasons for a new constitution” commenced as many including Majority leader, Osei Kyei-Mensah-Bonsu are of the belief that the 1992 constitution is unable to address challenges currently being faced by the country.

One of the ways to have the matter addressed according to Mr Barker-Vormawor, who is also a researcher at the Faculty of Law of the University of Cambridge, is to have citizens involved in the law-making process.

He noted that a law-making process devoid of the people’s energies without political alignments doesn’t bring about improvement in democracy since it leaves behind the best intellectuals.

To round up the conversation on the matter, host, Samson Lardy Anyenini once again interacted with Mr Barker-Vormawor.

Meanwhile, the Minority in Parliament has put together a motion demanding immediate steps to review the 1992 constitution.

The motion, expected to be moved when the house reconvenes on October 26, will among others, call for a bi-partisan approach.

Minority leader Haruna Iddrisu who confirmed this, said the equal numbers in parliament makes the time ripe for such a discussion.