Playback: The Law discusses parading suspects in front of cameras 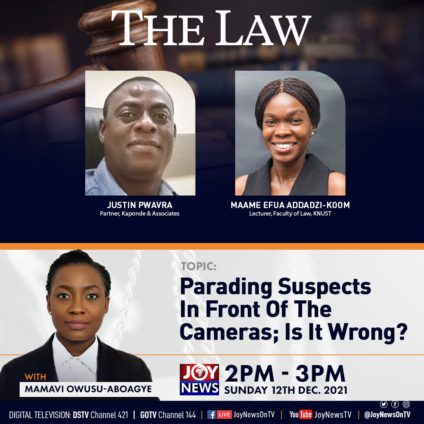 Today on JoyNews, The Law discussed what the country’s laws say concerning parading suspects in front of the cameras.

The question as to whether this act is right or wrong stems from the Police Service’s decision to stop displaying faces of suspects who are yet to be convicted.

Host, Mamavi Owusu-Aboagye delved into the matter with panelists; Partner of Kaponde & Association, Justin Pwavra and Maame Efua Addadzi-Koom, lecturer at the Faculty of Law of Kwame Nkrumah University of Science and Technology.

The Ghana Police Service in a Facebook post noted that the identities of suspects will only be displayed when the suspects are properly convicted before a competent court of law.

However, suspects who are declared wanted by the courts with a warrant of arrest for various offences, shall, where necessary, have their faces and other physical attributes published for purposes of identification, arrest, and prosecution.

According to the Service, this is part of efforts to become a world-class Police organisation and the best institution in the country, serving as a reference point in Africa and beyond.