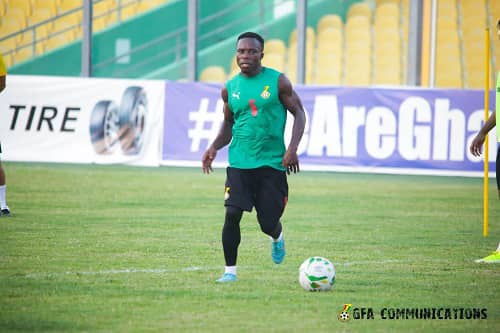 A loan move to Swedish side BK Hacken in 2014, stints at Sudanese Clubs Al-Merrikh and Al-Hilal Club and a short stint at Indian Super League side NorthEast United is what marks attacking midfielder/ winger Augustine Okrah’s CV as far as foreign clubs go.

Hardly something solid to hang a footballer’s career hat on especially one from a highly touted football hotbed Ghana is.

Just two games separate Okrah from concluding an impressive outing in the 2021-2022 Ghana Premier League and thanks to his contributions, Bechem United has the FA Cup Final game to play against Accra Hearts of Oak later this month.

Though the 28 year old trails lead scorers Franck Mbella Etouga of Kumasi Asante Kotoko’s 21 goals and Yaw Annor of AshantiGold’s 20 goals, he could walk away with some team hardware should Bechem United beat defending champion Hearts of Oak in the FA Cup Final.

However, recent happenings suggest Okrah’s season is sure to be defined by his rejection of a Black Stars call up to compete in the Kirin Cup in Japan. This rejection comes on the back of failing to even make the bench for the 2023 AFCON Qualifier against Madagascar and subsequent omission from the list of players to play Central Africa Republic in Angola.

Perhaps, Okrah was upset about how he was treated by Black Stars handlers and his emotions got the better of him considering Hearts of Oak winger Daniel Afriyie Barnieh went through the same ordeal but went ahead to honour the call up for the Japan trip.

Aside the chance to compete for a place in the Black Stars particularly in a World Cup year, Okrah spurned the chance to boost his football career income [accumulated thus far] since reporting to national duties is very lucrative especially for a player competing in the financially ill Ghana Premier League.

The nail that sticks out gets hammered and unsurprisingly, many have tagged his actions as disrespect to the national cause and unprofessional to the point it just might sway support to get players from the GPL into the senior national team.

On the other hand, by rejecting a call up to the Black Stars, Augustine Okrah showed his willingness to play the long game.

In a perfect world, Okrah scores at least two more goals to close out the season with 16 league goals while bagging a couple more assists and the FA Cup title. His transfer market value increases and he stands a better chance to move to a club in Europe or top African side.

Hopping on a plane to Japan with realistically no chance of playing in any of the games against Japan and Chile is a distraction he can do without as this present phase represents the realistic final chance Okrah has to secure a lucrative move outside Ghana.

Let’s say Okrah ends the season with a big flush, transfers to an European club and continues his fine form there, the former Asante Kotoko player stands a better chance of a prominent role in the Black Stars than the role he was offered.

In recent years, GPL players called up to the Black Stars know there is little to no chance of playing and it is very palpable they are there to merely to check a ‘native’ box and keep GPL supporters in several football quarters happy.

The latter issue has some similarities to what the National Football League [NFL] is dealing with when it comes to hiring of minority mainly Black or African American Head Coaches. To ensure individuals from black backgrounds get a fair chance of getting a head coach role in the league, the Rooney Rule was established.

However, NFL Team Owners and General Managers have managed to skirt around the rule by merely interviewing black coaches knowing very well the candidates aren’t getting a real chance of getting the big job.

They do this just to meet the requirement of the rule. Former Miami Dolphins Head Coach Brian Flores has sued the NFL after he got interviewed by the New York Giants for a Head Coaching role though the Giants had agreed a deal in principle to have Brian Daboll as its new Head Coach.

Getting into the Black Stars and actually standing a chance to play at any point over the past decade and a half practically requires players to have an European club on their CV’s and Okrah knows this all too well.

Based on this, his decision to prioritize his career and improve his chances of securing an European club move is a good choice.

By betting on himself to secure that European move, Okrah could improve his chances of making it into the Black Stars by taking the long road and this ‘rejection’ will be long forgotten by then.