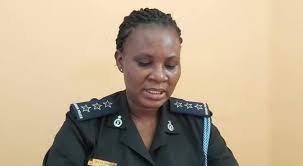 The Central Regional Police Command has commenced investigations into the recent bullion van robbery attack at Gomoa Okyereko on the Kasoa–Winneba road in the Central Region on Thursday.

This was revealed by Deputy Superintendent of Police (DSP) Irene Serwaa Oppong in an interview with AdomNews.

A police officer seated at the front passenger seat on Thursday evening nearly lost his life when an armed group attacked the van conveying some money to a bank in the area.

The robbers, however, missed their shot thereby shattering the window in the process.

After the bullion van driver sped off with the money, the Winneba Police Patrol team dispatched to Mpata Junction rushed to the scene.

They engaged the robbers in a gun battle forcing the armed robbers to flee the scene.

Although the robbers are run away, DSP Irene Serwaa Oppong has assured that the criminals will be captured and prosecuted.

This attack comes on the back of similar attack at Adedenkpo, near James Town in Accra.

A police officer, Constable Emmanuel Osei, who escorted the bullion van and a bystander, Afua Badu, were shot to death.

Another police officer was killed while on escort duty on the Adansi Fomena road in the Ashanti Region.

The group of armed men, a total of 10, shot Lance Corporal Martin Babah in bullion van he was escorting.

DISCLAIMER: The Views, Comments, Opinions, Contributions and Statements made by Readers and Contributors on this platform do not necessarily represent the views or policy of Multimedia Group Limited.
Tags:
Bullion van robbery
Gomoa Okyereko
Kasoa–Winneba road