Prove it or shut up! - Charterhouse tells Shatta Wale - MyJoyOnline.com

Prove it or shut up! – Charterhouse tells Shatta Wale 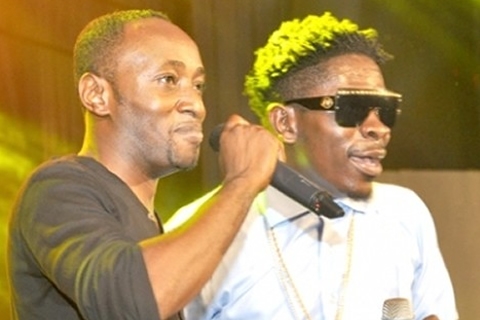 Organisers of the annual and prestigious Ghana Music Awards, Charterhouse, has challenged Dancehall artiste Shatta Wale to substantiate his allegation that, the outfit paid Nigerian artistes, Davido and Iyanya huge sums of money to perform at the awards, yet refused to pay his asking fee of GHc70,000.

With few hours to the awards on May 3, 2014, Shatta Wale posted on his Facebook wall that, he was not going to perform at the awards because his asking fee of 70,000GHC (US$24800) has been turned down by the organisers, claiming the amount was outrageous.

Adding that, “But they [Charterhouse] will pay huge sums of dollars to other artistes from other [Nigeria] countries to come and perform. but for us (gh artiste), they will say the money is too much for them to pay..”

Reacting to the allegation for the first time at a post-event media soiree for this year’s awards, Charterhouse’s PRO, George Quaye said that, their outfit is challenging the newly crowned Artiste of the Year to back his allegations with evidence or stop deceiving the public with false information.

“It is not just Shatta [Wale] who has made allegations about VGMA organisation doling out [huge] sums of money to Nigerian artistes.
Now the practice in Nigeria … is that a lot of the time, for awards that are designed to honour them, they [Nigerian artistes] do not really charge.

For those that even charge, it’s not their professional fees that they are charged,”George Quaye said. He said that, the Aye singer, Davido didn’t charge his outfit to perform on the night, instead they took a per diem. According to him, Davido saw the show as a platform to promote himself.

Speaking about Iyanya, George said, “For Iyanya and the rest of the team, they did what the others have done in the previous years, which is usually an honorarium and that honorarium usually ranges between US$2,000 to US$5,000 depending on who."

George mentioned that, most foreign artistes who had previously graced the awards had done so on honorarium. “They do not charge officially to perform at the VGMAs. It was unfortunate when we heard Shatta [Wale] say that. Any of you can ask him to prove it, maybe he has seen a business engagement contract that, we [Charterhouse] do not have.”

“His so-called crusade is fake; he is using his influence to spread falsehoods and I think it’s so unfair and unjust. He is a role model and must speak the truth at all times.” she said.