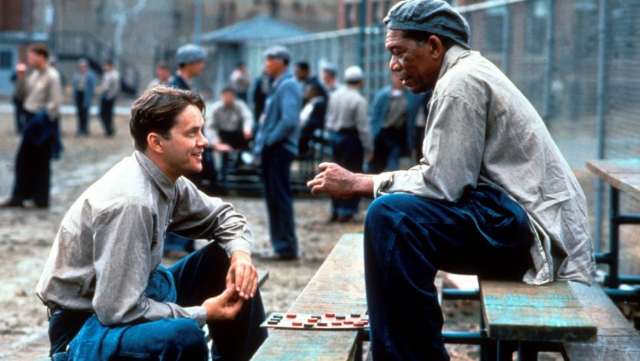 Bone Lazy
Do you know the other day I watched a movie on DVD on a television without a remote control? It was a very strange feeling, not being able to point anything at the screen. And I found I was most reluctant to get up and adjust anything on the set. Please note, the television could not have been more than two or three metres away from me. Honestly, I was lying down, but still….this is how it starts, innit?!

Old Movies
The DVD was an old movie and I've been watching some old favourites recently. Anyone remember The accused, with Jodie Foster? The rape scene in that movie is not for the squeamish; very difficult to watch. Soul Man anyone? That movie provides a wonderful view on what it might mean if a white man became 'black'. Well, temporarily anyway. The Man With One Red Shoe? Tom Hanks blowing bubbles after brushing his teeth with shampoo, courtesy the CIA. Cape Fear with Robert De Niro: "A few minutes with me and you'll be ready to speak in tongues!"

The Shawshank Redemption is still one of the best movies ever: "Put your trust in the Lord. Your *ss belongs to me." It's also one of the saddest movies ever. Do you remember the sub-story of Brooks the librarian? "I don't like it here. I'm tired of being afraid all the time. I've decided not to stay." I cried again.

And Arthur with Dudley Moore? The story of a rich drunk playboy millionaire who just happens to have a great sense of humour. "Isn't fun the best thing to have?" "Aren't waiters wonderful? You ask them for things and they bring them. Same principle as Santa Claus." And my favourite line from the movie: "Are you married?" "Once. She's alive."And Blind Date? "I only wish we were in the army so I could you shot…Twice."

Ghanaians And Food
Have you noticed how focused Ghanaians are when buying food? I mean focused, to the detriment of all other activities? I say this because I live in an area inundated with eateries and random food spots. And all around this hive of activity, especially at lunchtime and in the evenings, people are walking, cycling, driving, even running, for food, with food, around food. And they are breaking all manner of road safety rules, flouting laws, and as for etiquette, it is out the window. All because the people involved are focused on FOOD!

The other day in Cantonments I saw some idiot driver hurl his door open and step out right into the path of a cyclist. The cyclist performed some amazing avoiding techniques and managed to avoid this creature. And where was the creature headed? Across the street to buy Hausa koko. He didn't even notice the cyclist and the near accident. The cyclist seemed too shocked to shout anything, which was pretty impressive. All because of food! There's a reason we have a phrase like 'stomach direction' in our culture…

Policeman's Cap
I saw a policeman picking his cap from a vendor's table on a pavement the other day. First of all, I was intrigued by the fact that he wasn't wearing it; it was a hot morning. Secondly, the friendship on display when he puts his cap on a newspaper vendor's table…I just wonder if somehow the policeman could be compromised in some situations. Worth a thought?

Handwriting
What's your handwriting like? Mine has always been pretty terrible, and it's getting worse as I age. I blame this entirely on technology. I write far less now than I used to, and I tap on a keyboard all the time. Even when it was slightly better someone once asked if I had ever been a doctor, maybe in a past life. He said my handwriting was the kind that doctors aimed for when writing prescriptions…

Don't Touch Me!
How do you feel about someone sitting very close to you on a church pew that is otherwise empty? You know, a complete stranger sits right beside you, almost touching, when the rest of the pew is completely empty? Any thoughts?

An Organists Birthday
Speaking of church, the other day our organist was one of those celebrating his birthday. When the priest summoned those celebrating to the altar, our organist began walking up and then suddenly remembered that he had to play the tune for the hymn we were to sing during the birthday prayers. He runs back to the organ, gave us the tune, and proceeded to the altar. We sang okay without him too, and since we were also able to sing Happy Birthday without the organ, I wondered: do we need the organist?? Actually, yes, we do!

It's My Blessing!
Still in church, I found GHC5 on the floor in my pew the other day. I asked the lady behind, the man beside me, and the old geezer in the pew in front, and none of them were missing any money. I duly handed it into a sidesperson to be added to the collection for that morning (which had already been collected). After mass, the old geezer came to me and said he had discovered that he was missing GHC5 from his pocket, but since he saw me handing it to the sidesperson then that was okay. Question: who gets the blessing for handing it in to the church? Me, because I handed it in or the old geezer because it was his money??

Heat
I suspect one of our dogs is in heat! How can I tell? Her behaviour is similar to mine….

Speaking of being on heat, what comes to mind when you see a person who normally wears their wedding ring….ring-less? I think you form a different impression when it's a man. But when it's a woman? Hmmmm. Of course, there are very innocent reasons: took it off to bathe, to wash, for a manicure, lost it, having it polished, etc etc. But it's always more exciting when none of the above are the real reason, innit?

What Can You See?
Have you ever peered into a peephole on a door (in a door?) from the outside? You know it's designed to be one-way, right? So why do some people peer into them anyway? Are they seriously hoping to see who or what is on the inside? Really? Since we are speaking about impossible things, why do footballers argue so violently with referees after they blow for a particular decision? Is there one example of a recorded event in history where a referee changed his mind after blowing the whistle because a player attacked him??

Follow-up: Recently I said in a post on this blog how much I am inspired by the men and women who walk and jog through Christian Village every morning. Well, I also said that I was not inspired enough to join them. All that has now changed. I have been inspired by a certain lady. I need to find out when she runs so I can join her….and run behind her. Only behind her. Thank God I'm a man.

Follow-up: I also said that I had recently begun consuming coconut oil for health reasons. I've been asked by a couple of people about its scent and taste and I repeat that it's easy to drink and does not have an overpowering scent at all. The one question I have not been able to answer is whether you can kiss after drinking it. Kiss legally of course. Illegal kissing is a whole different ballgame….or so I am told.

Follow-up: Recently I spoke about the dogs at home going ga-ga when they see crows on our roof. Speaking of birds, smaller birds have begun to float uninvited into our yard, and they are obviously not there for the scenery. They have been eating the dog's leftovers! I can see how this makes for a nice snack during the day, but how come the dogs don't attack the smaller birds? Not only are they present but they are eating their precious food! I haven't actually seen the smaller birds swimming in the dogs' water bowl yet….but I kind of get the feeling that they might….as soon as a lifeguard is provided! This could be the beginning of a whole new ecosystem: dogs, birds, humans…I can't wait for a random chicken to arrive!

Dogs Again?!
And to wrap up, we were having our weekly FGBMFI meeting at the Fiesta Royale Hotel recently, listening intently to the person speaking, when someone's mobile rang, loud. The ringtone? Who Let The Dogs Out! I laughed for about 5 minutes nonstop! It was the most perfect piece of unintentional comedy I've ever experienced! God is good, and so is life!