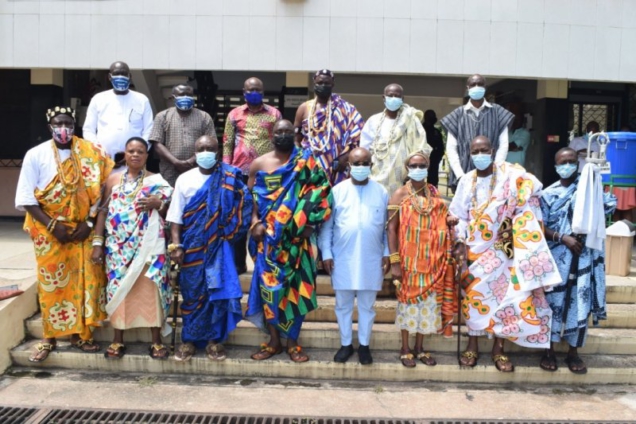 Volta Regional Minister, Dr Archibald Yao Letsa on Tuesday called on the people of Avenor Traditional Area to reciprocate the government’s contributions to the area to justify the continuous trust reposed in them.

He said the government’s assistance to the area include the creation of a traditional Council and the elevation of the area to a Municipal status.

Dr Letsa said this when Togbe Dorglo Anumah VI, Paramount Chief and President of the Avenor Traditional Council and Chiefs from the Area paid a courtesy call to him at the Regional Coordinating Council to congratulate the Minister on (VRCC) his re-appointment.

He referred to the Avenor area as an oasis of peace in the region, which refused to concede to the threats and activities of the secessionists.

Togbe Anumah said the facilitation of the historic visit to the Jubilee House by the Minister last year, the construction of Akatsi town roads, the development projects and the maintenance of peace were legendary.

He requested the modernisation of the Akatsi central market and the improvement of the standards of living of the people and appealed to the government for social amenities to facilitate development.

Togbe Anumah, who is also the representative to the National House of Chiefs, appealed for the installation of traffic lights in the central business district of Akatsi and the construction of speed ramps to curtail the frequent pedestrian knockdowns.

He requested the re-nomination of the Akatsi South Municipal Chief Executive, saying “we are firm believers of meritocracy and accountability and Mr Leo-Nelson Adzidogah has warmed our hearts to continue to champion the development aspiration of the Municipality.

Dr Letsa, in response, pledged the VRCC’s support towards the development of the area and asked the Assembly to champion agri-business ventures for the youth for sustainable job creation.

He said some citizens of the area were ready to invest and pledged to undertake the liaison for a take-off.

He urged the people to rally behind the Paramount Chief, whom he described as resourceful and a national asset to move development to the next level.

Mr Adzidogah, Municipal Chief Executive of Akatsi South, said the Assembly was working on getting an investor to support the Municipality to construct a new market on a public-private partnership basis.

He said other projects in the pipeline include the construction of a new Assembly complex, a community centre and a traditional council.

DISCLAIMER: The Views, Comments, Opinions, Contributions and Statements made by Readers and Contributors on this platform do not necessarily represent the views or policy of Multimedia Group Limited.
Tags:
Avenor Traditional Area
Dr Archibald Yao Letsa
Volta Regional Minister