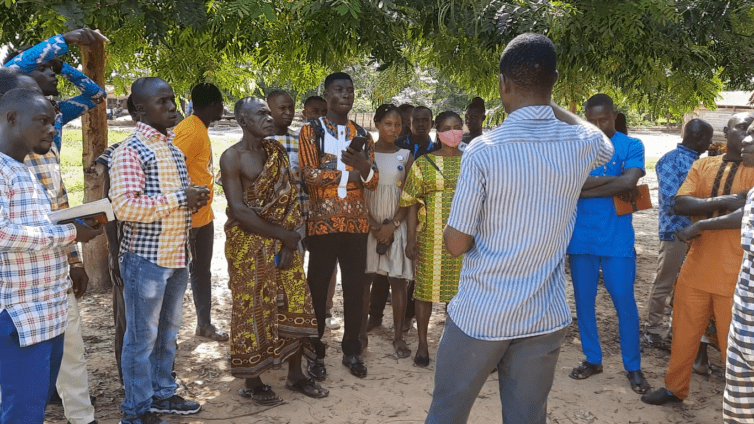 Residents of the ‘Immediate Catchment Communities’ of Kinross Chirano Gold mines in the Western North Region are appealing to the government to come to their aid to deal with what they describe as the mining company’s failure to properly act in ways that would improve their standards of living.

They visited some communities in the Asutifi North District of Ahafo Region, including Kenyasi resettlement camp at Kenyasi No2, Tutuka, and Ntortroso, to ascertain and compare the environmental, social, and livelihood measures put in place by Newmont Ahafo Gold mines to support their affected residents and communities.

With support from the Global Greengrant fund, the over 30 people representing the communities, said their situation in the Western North Region is the worst off.

They said if they don’t get help, they would be left with no choice but to demonstrate against the mines to drum home their demands.

Lack of employment opportunities, inhuman resettlement plan, inadequate or no farmer compensation, poor road networks, lack of hygienic drinking water, maintenance of mechanized boreholes, and payment of electricity bills, they said are some of their concerns.

Secretary of the residents of the “Immediate Catchment Communities”, Daniel Mensah said because they were not happy with how the mining company has been dealing with them, they visited Kenyasi and surrounding communities to interact and learn from the residents.

“Affected residents of the Newmont Ahafo Gold mines are getting better treatment than us, and that is not to say that their living situation is excellent. Their employment issue is much better. At Etwebo, for instance, we have only one tank serving the community with water, while a much smaller town like Tutuka has been provided with two tanks. Electricity challenges, among others, remain a worry”, he enumerated.

“Youth unemployment is a serious issue for us and we want Chirano mines to help employ the youth and we urge them to also do all other things to improve our standard of living”, he said.

“First, they said they were unable to employ us because we had no education. But now that a lot more people have completed their education, still getting employed in the mines remains a challenge. They also train people, but they hardly employ them. Dust is also killing us, and our visit to Kenyasi has revealed that they have fewer issues with portable drinking water, etc. Government should come to our aid to get the Chirano mines to support us after their activities displaced us”, Diana Tetteh, a resident of Akoti said.

Cecilia Kyem, the chairperson of Obrayeko affected residents, said they have a lot of challenges in their resettled communities. “The resettlement apartment is very small and clustered with little space. Government and international bodies must come to our aid because we are suffering, else we would take steps and return to our original place before the company came”.

“They moved us from our farms but up to now, the mines are yet to finish paying all agreed compensation. Our children are home because we have no money to further their education. We need help”, Georgina Edu, also from Obrayeko said

Assemblyman for Sreano electoral area, Mathew Agyako, said they are on their own for now since the District assemblies for the affected communities have done little to support them get the mining company to mitigate the impact of their activities on their land.

“The youth is saying, if the situation does not change soon, they would advise themselves, even if it means demonstrating against the mining company”, he stressed.