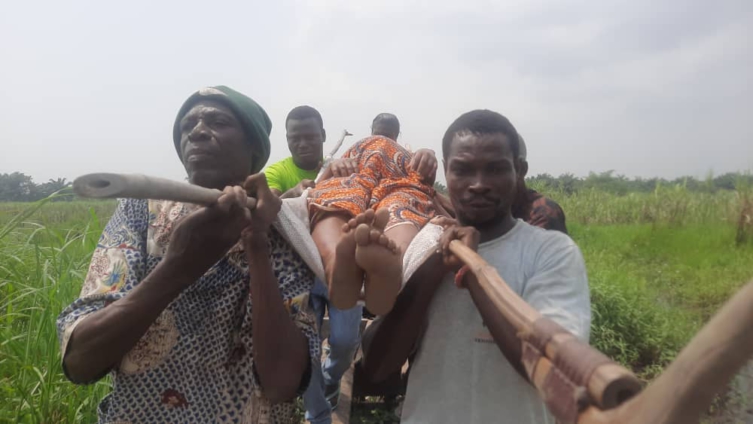 For residents in Lawoshime and Mamime, each day in the two farming and fishing communities in Keta brings tears to their eyes as they have to always walk long distances especially to seek health care.

The wooden footbridges linking the two communities from Hatorgodo is a death trap as life becomes more difficult in the rainy seasons.

A visit to the communities by JoyNews revealed that the sick especially pregnant women are carried in a specially made wooden structure by 4 men for about 5 kilometres to the nearest health centre in Hatorgodo or the Abor hospital for emergency cases.

In many instances, according to the residents, they lose their relatives on the way to seek health care due to the long distance and lack of health centers in the two communities.

The situation, according to the residents, is worrying as they also carry their deceased relatives for the long distance to the mortuary.

They want government to as a matter of urgency construct roads to the communities or a well-designed concrete bridge over the Ladzorbui River as the wooden bridges have become a death trap especially with crocodiles in the river.

“We always carry our pregnant women in labour pains in a specially made wooden structure to cross the two wooden bridges and walk 5 km to the next town before they can access health care delivery and even our dead relatives are carried in the same way,” the residents lamented.

In most cases, some of the pregnant women and their unborn babies die on the way before reaching health care facilities.

A pregnant woman in labour pains was seen by joy news being carried on the wooden structure to the health facility in Hatorgodo and a mother of two who is expecting her third child had just walked the long miles from the health centre back to the village tired.

Madam Atsufi, as she is called, recounted how she suffered trying to seek health care in her previous pregnancies and hopes that government listens to their cries and plight and do something urgent about their situation.

“You see, this is my third pregnancy and I can remember vividly the pains of the last two pregnancies, it’s like we don’t matter to any government even though we are also Ghanaians and so we need government to help us,” Madam Atsufi pleaded.

One of the residents also noted that aside from the deplorable nature of the road, there is no electricity in the town making it difficult to have teachers accept postings to the village to teach in the only basic school which is also in bad shape.

“There is no electricity in the area and teachers refuse postings to the area and it is affecting effective teaching and learning,” he lamented.

The situation according to a resident called Festus Keku has been with them for decades with politicians coming every four years to campaign for votes and leave them after they have whatever they came for.

“Politicians only visit us to beg for votes and after that, we don’t see them again until another election,” he said.

The MCE for Keta Emmanuel Gemegah said he was very much aware of the plight of the people because he has been to the communities several times not only for political gains but because he is a grassroots man and has the interest of the people at heart.

He expressed worry about the wooden footbridge which he said is dangerous adding the problem could only be solved if the bridge is constructed then the road network can also be tackled.

“I have plans to hopefully make sure that works start soon on the construction of the concrete bridge in these farming and fishing communities,” Mr Gemegah promised.

Mr Emmanuel Gemegah also noted that the road network is also negatively impeding economic activities in those communities as the residents have difficulty in transporting their farm produce to other communities for markets but government is committed to making sure that the plight of the people comes to a stop with the construction of the bridges.

DISCLAIMER: The Views, Comments, Opinions, Contributions and Statements made by Readers and Contributors on this platform do not necessarily represent the views or policy of Multimedia Group Limited.
Tags:
Keta
Lawoshime
Poor roads
Pregnant women