Revealed: The secret lives of your fellow plane passengers

At any given time, there are about 5,000 planes in the air over the United States, many with hundreds of passengers, all with a story and their reasons for going from A to B.

It was this fact, coupled with the boredom that comes from regularly flying for up to 13 hours to and from the United States for work, that led Eva Liparova to take action.

Tired of inflight movies and determined to get people away from their screens and interacting with each other, she came up with a plan in May 2014.

Liparova boarded her 11-hour London to San Francisco Virgin Atlantic flight armed with a notebook and pen and a quest to collect as many stories from her fellow passengers as possible.

"I work as a theater producer and co-founder at Parrot in the Tank, and most of the time we stage shows that are inspired by real people's stories," she tells CNN.

"So I have this fascination for collecting strangers' stories because I just think that's such a nice way to get through the day.

"My overall aim was to see how many stories could I collect and what could I learn about the types of people who were flying on this particular route." 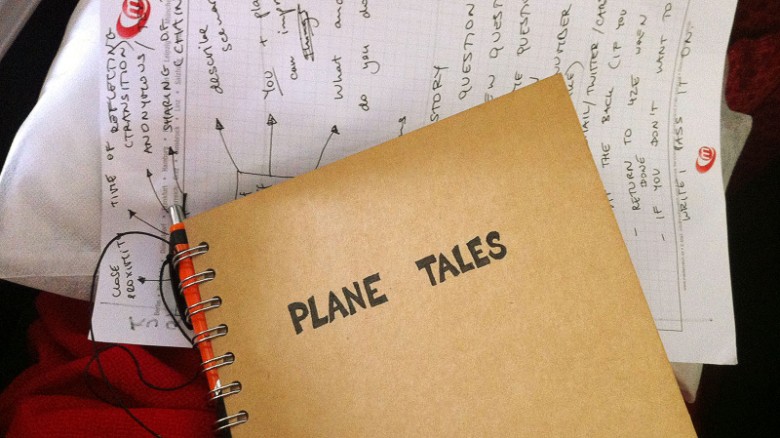 This wasn't as easy as she had imagined, thanks to the sudden onset of stage fright at 30,000 feet.

"It was quite funny because it took me about four hours to be brave and gather the courage to walk to the first person!" she says with a laugh.

But eventually she did, handing a simple, brown notebook and pen to a woman in the front economy seat.

Inside was a short introduction by Eva and some instructions:

1. Read the last story in this book.

2. Write a response to the question.

3. Ask a new question or use the same question again.

4. Pass the book to the person next to you.

In total, 33 people wrote in the book with stories of honeymoons, babies and a marriage proposal among the tales that emerged.

"I guess the loveliest thing is that if you receive the book from somebody and you read the last story, you basically get the other person's context, so the stories acted as a natural icebreaker," says Liparova.

Some entries were more personal than others.

"I think what surprised me most was just the level of how open people were about their personal life," she says.

"There was one story in which a woman mentioned visiting her elderly parents in Yorkshire [in northern England] and she essentially said, 'I think that was the last time I saw my dad.' That's a very intimate thing to share with strangers.

"Then there was a guy flying to San Francisco to ask his girlfriend to marry him — and then you got this chain of cheering in the following stories.

"It was strange how incredibly quickly you can establish a sense of friendship and community if you go into a situation with complete curiosity." 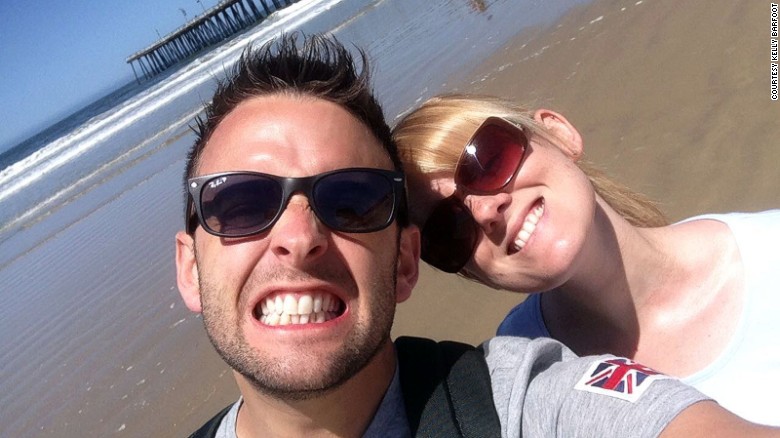 One of the honeymooners on the plane was newlywed Kelly Barfoot, who was traveling with her husband following their wedding.

"2 days after getting married, I am sat on this plane for our honeymoon (a 3 week West Coast adventure!). To seat 59A, good luck with the proposal, I hope she says yes!

"It's good to see what a book like this can do to a bunch of random people, how it brings people together to share stories and adventures.

Barfoot thought the book was a great idea.

"It certainly made you think more about what the other passengers' stories were and why they may have been on the flight," she says.

And the launch of the project on their honeymoon flight made it seem all the more fitting.

"It kind of made the flight feel a bit more special, I'd say. Because it felt like we had something more to say than just 'we're going on holiday.'"

She said her idea for the question she asked the next passenger was inspired by the knowledge that she and her husband were hoping to start a family soon. 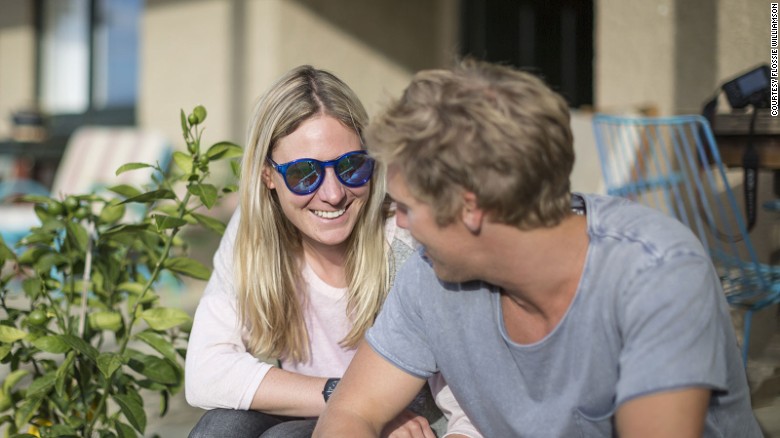 That honor was bestowed on Flossie Williamson, who was on her way to starting a new life on the other side of the world with a man she had met just six weeks earlier.

"I am traveling to San Francisco en route to New Zealand," Williamson wrote. "The reason for my trip which I have now done twice in a month is because when I visited last time I fell in love.

"All very cheesy but I am now moving to the other side of the world to start my life with a very funny Kiwi.

"I am crazy excited for the move and the adventures I will have.

"If I could click my fingers I would hope that everyone finds that special person and has the guts and courage to drop everything to be happy.

"Written by a slightly crazy, happy girl in 62G."

"I had been watching this book being passed around and people's reactions for hours," she says. "I was at the back of the plane so it took forever to get to me, and I was worried I was going to be asleep and miss out on it.

"I read lots of the other [stories], so many anniversaries, honeymoons. I especially liked the guy on his way to propose — it seemed that love was most definitely in the air," she said.

As for her offering: "I felt like a bit of a dork when I wrote it because at the time I was sat in my seat looking smug, nervous and grinning from ear to ear, and by telling my story, my neighbors would then know why!

"It couldn't have been a better flight to have written in it."

Liparova's next project is to find the other 31 contributors.

"As a thank you for writing in the book, it would be great to connect with them and simply just hand over all the stories to them because at the end of the day, they are the co-writers of the whole project, so I think it's only fair."