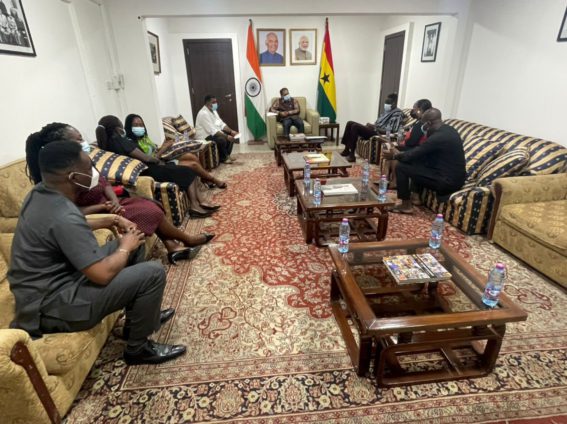 The Membership of Rotary Club of Accra-Industrial have paid a courtesy call on the Indian High Commissioner to Ghana, Sugandh Rajaram in his office at Roman Ridge in Accra.

This visit follows a request by the president of the Club Mr Santosh Gopalan Nair and the Rotary International President Shekhar Mehta for the High Commissioner to officially join the Rotary family.

Rotary is an international Service Organisation with a global network of over 1.2 million neighbours, friends, leaders, and problem-solvers who see a world where people unite and take action to create lasting change – across the globe, in our communities, and in ourselves.

The President and the Board of the Rotary Club of Accra-Industrial, took advantage of the visit, to officially induct the Indian High Commissioner to Ghana, Sugandh Rajaram to the club.

The induction ceremony was conducted by the President in the presence of the board members. H.E. Sugandh Rajaram was thus made an honorary member of the Club.

In attendance were; the Charter President, Francis Sam, the President Elect, Senchim Dean, the Membership Director, Nana Konadu, PR and Fundraising Director, Prosper Ashiquaye Doku and other members of the board.

Rotarian President Santosh, in inducting the diplomat, indicated that, Rotary as an international organization and its member clubs, from time to time, welcomes new members so that it may not only increase its usefulness and influence as a club, but also extend the spirit of Rotary throughout its jurisdiction and beyond.

He welcomed H.E. Sugandh Rajaram to the ranks and admitted him to membership of the Rotary Club of Accra Industrial.

He also affirmed that the Diplomat manifested and exemplified the qualities of head and of heart, which makes him a good ambassador for the message and ideals of Rotary to those with whom he comes into contact.

He stated that Mr Sugandh Rajaram has been admitted not only to the Rotary Club of Accra-Industrial, but also to a worldwide association and by virtue of his membership in this club, he will be welcomed into the fellowship of any Rotary club the world over.

He said, “the honor and privilege of Rotary membership, carry with it, duties and obligations and charged him to abide by the Four Way Test which is one of the governing instruments of what Rotary members do, think and say in their daily endeavors”.

His shirt was symbolically pinned. He is required to have the pin on, all the time. He was also given souvenirs contained in a file that included; a pendrive containing various rotary information, a framed Four Way Test, a bannerette and a rotary cloth.

He was therefore implored to honour the club’s meetings, to perform his share of Rotary service and to place his knowledge, expertise and talents at the disposal of the club in its task of carrying the principles of Rotary into the daily life of the community.

H.E. Sugandh Rajaram in his acceptance speech expressed his profound gratitude and relished the invaluable opportunity accorded him by the Rotary club of Accra-Industrial to serve humanity more.

He underscored the need for Rotary and his outfit to collaborate on many fronts to serve the vulnerable.

He intimated that his life, both public and private, is about service to humanity which fits squarely into the ideals and objects of Rotary. Therefore, he would use the time available to him, to serve as an honorary member of the club.