Safety challenges in Wa Airport to be addressed soon – Adda 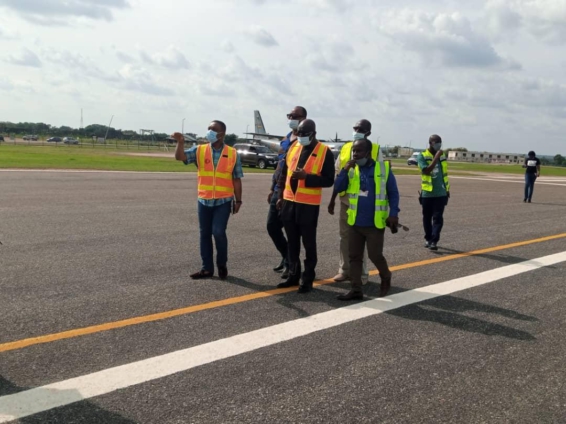 Aviation Minister Joseph Kofi Adda has assured that major safety challenges at the Wa Airport would be addressed to guarantee the safety of flights.

These safety challenges include the interference of Radio and Telecommunication masts with airline communication systems and navigation service devices.

The others are the inability of aircrafts to refuel at the airport; the need for two additional aprons and a new control tower.

Mr Kofi Adda, who visited the Wa Airport, said the challenges must be addressed to ensure the airport met the standards set by the Civil Aviation Authority and the International Civil Aviation Organisation (ICAO).

The Aviation Minister, who is also the Member of Parliament for the Navrongo Central Constituency in the Upper East Region, said because of the interference, the airport management had reduced the length of the runway to 70 metres to enable landing of aircraft.

He said on the relocation of the masts would enable the airport to have the full length of 2,000 metres to ease the difficulty associated with the landing of aircraft.

He said the Ministry would work with the National Communication Authority (NCA), adding that by the end of August 2020, they would be clear on the timelines for the relocation.

He said he had given his commitment to parliament that Ministry will undertake the relocation if the owners of the masts failed to do it on their own.

However, the Ministry would charge them for the cost of the removal.

On the communication system interference, Mr Kofi Adda said the challenge made it difficult for the pilots to communicate well with the civil aviation navigation officials at the airport.

He noted that the current Apron was small for its purpose, saying reports from the Ghana Air Force was that they could not park their helicopters there when an aircraft was coming to land, hence the need to provide two additional Aprons.

The Aviation Minister noted that the plan to improve safety at the airport was part of President Nana Akufo-Addo’s agenda to provide infrastructure to enhance effective and efficient operations.

Mr Kofi Adda said the commercial airlines stopped flying to the region due to COVID-19 and the lack of passengers.

He expressed hope that when the government reopens the airport for international airlines by early next month, passengers would be available for the airlines to resume operations.

On encroachment at the Wa Airport, the Aviation Minister noted that the Ministry was in touch with the Regional Lands Commission to ensure they were removed.