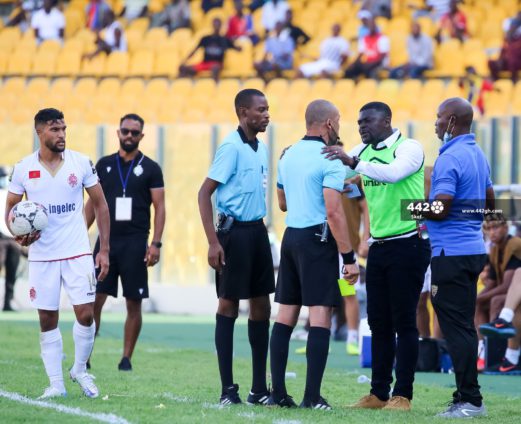 Head coach of Accra Hearts of Oak, Samuel Boadu has apologized for his yellow card picked up in his side’s 1-0 win over Wydad Athletic Club on Sunday.

The gaffer was cautioned in the game following an intense confrontation with referee Helder Martins de Carvalho at the Accra Sports Stadium over the weekend.

The coach confronted the referee as he felt his players being undone by the center referee during the game, leading to him being shown the card.

The booking was not the first Boadu has received this season, as he has previously suffered same faith in some games already this season including their friendly games.

Prior to Sunday’s fixture, Boadu was booked in the friendly game against Tema Youth. He was also sent off in the friendly encounter against Togo’s Asko Karalast month while being warned in the win over C.I Kamsar.

In June, he got similarly carded when after a kicking a bottle in anger during the crucial Super Clash against Kotoko.

However, the coach says he has taken lessons from his book and hopes to see changes going forward.

“I have learnt a lot from the yellow card I received today so things will change going forward,” the former Medeama boss said after the game.

Hearts ended the game on the winning side courtesy the Isaac Mensah’s first half goal from a Salifu Ibrahim cross.