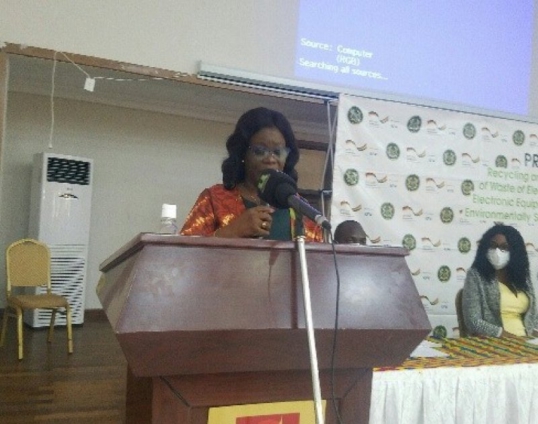 The Ministry of Environment, Science, Technology and Innovation (MESTI) has sensitised scrap dealers on the dangers of the manual gathering and disposal of used electrical gadgets.

At a sensitisation programme in Koforidua, the Ministry also took the scrap dealers through the measures the Ministry was adopting to address the risk E-waste posed to the environment.

The MESTI, in collaboration with the German government, is implementing a project to reduce the health hazards in the activities of scrap dealers in the informal sector through a system to buy the scrap for safe disposal and to reduce the environmental pollution and its resultant health risk.

Mrs Cynthia Asare Bediako, Chief Director of the Ministry, said Ghana’s E-waste management was largely controlled by the informal sector through activities such as burning of scrap items, describing it as huge devastation on the environment and posed health risks to humans as well.

She said studies had shown that smoke from the burning of these scrap items had a debilitating effect on the lungs and hearts of humans, yet the scrap dealers relied on the burning and manual gathering of the scraps to make a living.

She said the MESTI recognised the huge number of people who relied on the scrap gathering and selling business to make a living and therefore designed the new project to enhance the safety of the dealers and the entire population against the effects from some of their activities.

Mrs Lydia Esuah, the Coordinator of the Recycling and Disposal of Electrical and Electronic Equipment in an Environmentally Sound Way Phase 1, explained that the project would support business methods, legislation and policy direction to minimize negative environmental and human health impacts.

She said about 99 per cent of scrap dealers, who used manual techniques such as burning and bare hands to sort cables and high chemical electronics were in the informal sector and said the project’s objective was to mitigate the effects of the activities on humans.

Under the project, a Hand-Over-Centre (HOC) was established at Agbogbloshie, the biggest scrap dealers hub, where dealers could sell their scrap items for a fee to avoid the burning and manual sorting out which polluted the environment.

She said another HOC was being constructed at the Atomic Energy premises and other centres would be established across the country for people to have access to such facilities to sell their scrap items for safe disposal instead of selling them.

The project Coordinator who said the sensitisation was to prepare their minds for the next phase of the project appealed to the participants to support the Ministry to achieve the purpose and assured that their livelihood would be protected.