‘Showcase your products and let’s buy’ – GUTA to AGI 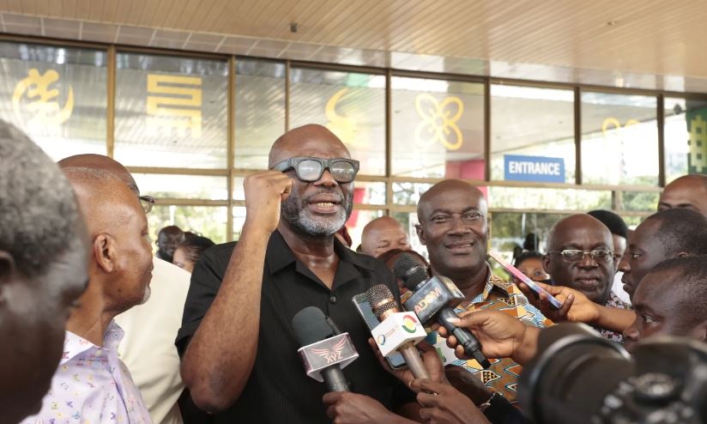 The President of the Ghana Union of Traders Association (GUTA), Dr. Joseph Obeng, has thrown a challenge to the Association of Ghana Industries (AGI) to take advantage of the high cost of imported goods to flood the market with Made-In-Ghana goods.

According to him, the current cedi depreciation rate which has made importation an exceedingly difficult venture has simultaneously created a golden opportunity for local manufacturers to show that they have the capacity to take over the market.

His challenge was triggered by the President of AGI, Dr. Humphrey Ayim-Darke, calling for the removal of the benchmark policy on imported goods.

He had stated that the benchmark policy was doing the local manufacturing industry a great disservice as it had made imported goods cheaper than the locally manufactured ones.

However, reacting to his statement, Dr. Joseph Obeng said the benchmark value on imported goods is rather negligible and taking into consideration the challenge with the country’s exchange rate, the AGI should finally take up the mantle and show their capabilities.

“My brother, the AGI President is talking about benchmark value. He has been dwelling on this benchmark, this is the real time that AGI should prove themselves because cost of importation has been so high it has been doubled, quadrupled ten folds. So then local industries if prices of imported goods have gone up show your ability, your capacity to surprise the market.

“Let’s take this advantage to patronize your goods. That’s what you have to be doing. You got the benchmark reduction, all that you’ve sought was that it should be removed so that imported goods go high, now imported goods have gone high thousand times, why are they not able to take the place, take the opportunity because it is locally made, it is not imported?

“So once it’s not imported the goods that are made in Ghana should be very very cheap, isn’t it? So ask Mr. Dakeh that, what are they doing to portray or advertise the goods that they manufacture in Ghana? Because in every bad situation there should be a good opportunity, and this is the opportunity where imported goods have become very difficult, very expensive then they have to showcase their products because it is made in Ghana and it is not being imported that it will be very expensive.

He added that, “Now we have the opportunity, golden opportunity, please let’s take this opportunity; we’ll support them, because the way to go is to patronize Made-In-Ghana goods and the time to do that is now as importation has become expensive. Showcase the product and let’s buy.”

Responding to his challenge, the President of AGI, Dr. Humphrey Ayim-Darke, stated that it is not a clear-cut situation as the GUTA President seems to suggest.

“The economic metric is not as simple as to say that once the exchange rate factors that are displaying a steep depreciation are there, all of a sudden the factories in Ghana should rise up to the occasion and there and there produce all manner of products,” he said.

According to him, the introduction of the benchmark value had derailed the developmental paradigm of the manufacturing industry in Ghana, weakening its capacity to embrace and take advantage of such situations in the way Dr. Obeng is suggesting.

“We did say that when this policy was tabled two things were happening; one, you were dislocating the developmental paradigm which indicates that the capacity of most factories were being distorted. And if you lose capacity when the opportunity comes, you’ll find it very difficult to even attain it. And therefore we advised against this policy,” he said.

He further revealed that the cedi depreciation is equally affecting local manufacturers who have to import semi-finished goods to add value to.

“Yes, we do not import every finished product, we import semi-finished because most of our enterprises are value addition. so therefore Obeng should realize that it is not a blanket statement to go on the street to suggest that once the cost of goods are gone up local factories should just feed in, that is just naivety,” he said.

DISCLAIMER: The Views, Comments, Opinions, Contributions and Statements made by Readers and Contributors on this platform do not necessarily represent the views or policy of Multimedia Group Limited.
Tags:
AGI
GUTA