Sisters doing it for themselves: DRC nun fed up with power outages builds own hydroelectric plant - MyJoyOnline.com

Sisters doing it for themselves: DRC nun fed up with power outages builds own hydroelectric plant 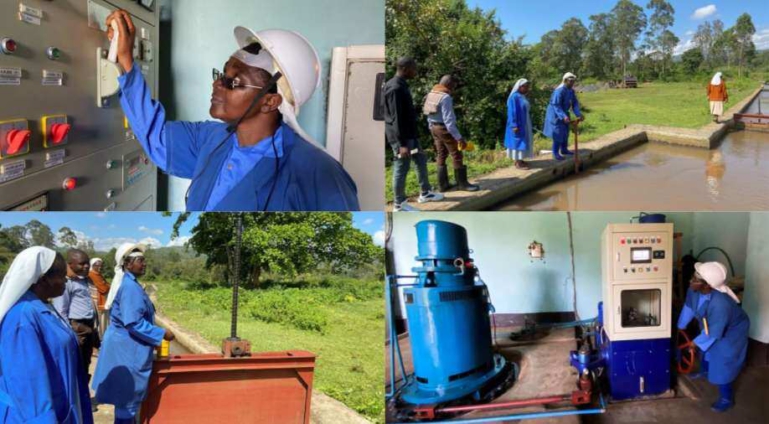 Sister Alphonsine Ciza spends most of her day in gumboots, white veil tucked under a builder’s hat, manning the micro hydroelectric plant she built to overcome daily electricity cuts in her town of Miti in eastern Democratic Republic of Congo.

She works around the clock with a team of nuns and engineers, greasing machinery and checking the dials of a generator that is fed from a nearby reservoir.

The mini plant lights up a convent, church, two schools and a clinic free of charge.

Without the plant, residents would only have electricity two or three days a week for a few hours.

“This is the alternator that produces the current and here we have the cabinet that sends the current to the population. It’s here that we make adjustments, it’s called the electrical cabinet,” said Ciza, 55, a portable voltage meter slung around her neck in the town of 300,000 inhabitants near the border with Rwanda.

Blackouts are a daily disruption in the Congo, a vast central African country of around 90 million people that sources most of its electricity from a run-down and mismanaged hydropower system.

The government has worked with foreign partners in an effort to increase the capacity of the mineral-rich nation’s ailing grid. Critics say the new projects focus too much on powering mines and exporting electricity to neighbouring countries.

Despite millions of dollars in donor funding, only around 20 per cent of the population has access to electricity, according to the World Bank.

Fed up with relying on candlelight and costly fuel-powered generators, Ciza started raising money in 2015 to build the hydropower plant.

She picked up skills as a young nun, repairing electrical faults around the convent, which convinced superiors to send her to study mechanical engineering.

Thanks to Ciza’s efforts, students at Miti’s Maendeleo secondary school can now learn computer skills from screens rather than from books.

“It was rare to find power during the day. We had to use fuel for the generator, but buying fuel was very expensive. It was no longer possible at some point, so we were forced to stop and only teach theory for the computer science course,” said headmistress Mweze Nsimire Gilberte.