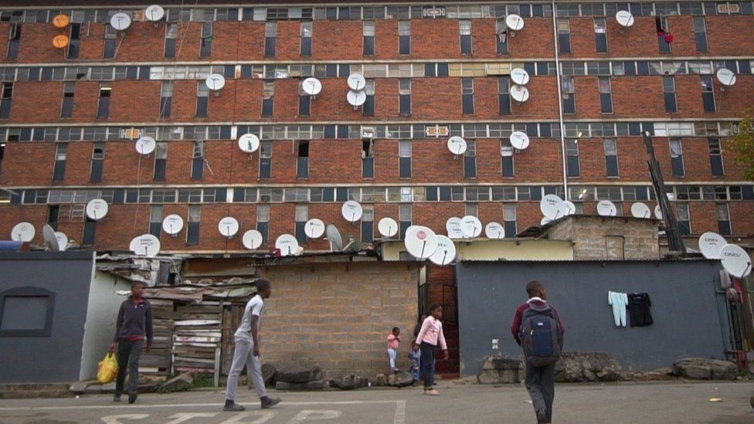 South Africa’s president says he’s “deeply disturbed” at the abuse of foreign nationals working in the country. It is a particular problem in the township of Alexandra, which was at the centre of xenophobic riots in 2008. Our correspondent Lebo Diseko has been talking to immigrants there, who say they live in fear.

“When they came here for the first time there were seven of them. They made us lie all down. They took the machines, hairdryers and sprays. We had no choice but to let them take them because they had guns”.

David – not his real name – sits nervously in front of me at his barber’s shop in Johannesburg’s Alexandra township.

The Mozambican looks down at his hands as he describes the numerous attacks he’s been the target of, simply for being a foreigner.

David says his attackers were South African, and that each time they make the same demand: that he should leave the country.

“They tell us we have to go, to close our business, but I don’t know where to go,” he says.

The shack which serves as his salon is less than two metres long, but it is clearly David’s pride and joy. Laminated pictures showing different hairstyles line the wall, and his clippers and other tools are neatly lined up on the side.

The money he makes here supports his family back in Mozambique. But he says he is willing to brave whatever danger might come to provide for them.

“As long as my family is eating, that is all that matters to me,” he says.

“They could kill me at any time. I don’t know what will happen”.

Recent clashes between South African residents of Alexandra and foreign business owners have raised fears of another outbreak of anti-immigrant violence in the country. It is in this township in 2008 that xenophobic violence began and then spread.

Nationwide, nearly three times as many foreigners were killed as a result of xenophobic violence in 2021 than the previous year, according to the African Centre of Migration and Society.

Poverty is one of the main drivers of such conflict, with South Africans frequently accusing immigrants of taking their jobs. One in three people in the workforce is currently unemployed, a figure that rises to almost two in three among people under 24.

The issue of jobs, and access to business opportunities in the township has been taken up by a group called the Alexandra Dudula movement. Dudula means “to push back” or “drive out” in Zulu.

It has closed down shops and stalls that it claims are run by illegal immigrants. Foreigners like David say it is people from the Dudula movement who carried out the violent attacks on them.

As our team makes its way through the township, we meet a group of Dudula activists getting ready to conduct what they call patrols, where they demand to see people’s immigration papers.

I ask spokesperson Agnes Malatjie how the group justifies taking the law into their own hands.

“We will not let those names that you called us – ‘hooligans, vigilantes’ – break the spirit of the community who are fighting for what’s rightfully theirs,” she tells me.

She accuses authorities of not enforcing immigration law or responding when South Africans are attacked.

“If the government does things the right way there won’t be vigilantism. We also get harassed, we were attacked on 7 March by foreign nationals with sticks, weapons. So some things need serious attention.”

Alexandra is one of the poorest urban areas in the country, and it sits in the shadow of the gleaming skyscrapers of Sandton, Africa’s richest square mile.

Its proximity to wealth and opportunity has long attracted newcomers to Johannesburg from around the country and the continent.

But as pressure on resources in this densely-populated area has grown, so too has the potential for conflict between recent arrivals and existing residents who feel they are being sidelined.

All of this goes a long way to explaining its cycles of violence, says Dr Lufuno Sadiki, a criminologist from the University of Pretoria. She explains it using what is known as “strain theory”.

“All of us want a good life, and not all of us have access to a good life.”

“In Sandton you don’t have to wake up in the morning to empty the bucket you’ve been using as a toilet. You open your tap, you’ve got water. You’ve got all these resources at your fingertips. And here you are just across the road in Alexandra, and every day this is what you see.

“It’s like a mirror that magnifies your frustrations. The inequality is right in your face. The thing that you want is right across the road and yet you can’t access it. Sometimes when you don’t have answers the easiest thing is to attack another person”.

19-year-old John – not his real name – says he too has been on the receiving end of several such attacks since he arrived in Johannesburg from Mozambique last year.

He and his friends have a roadside stall where they cook meat and porridge to sell to the township’s commuters.

But he says South Africans claiming to be from the Dudula movement have attacked them several times, stealing their stock.

“When Dudula comes they are armed with heavy leather whips, and they hit us. When they come we have to run and leave our stuff”

For John too, the dream was to support his family back in Mozambique. He hoped he might even be able to save enough money to buy his first car.

Those dreams now lie in tatters.

“I’m so scared I’m even thinking of moving to another country,” he says. “At home in Mozambique they know about our situation in South Africa, and they pray for us”.