‘There will be blood’: Xenophobia in South Africa routine and lethal 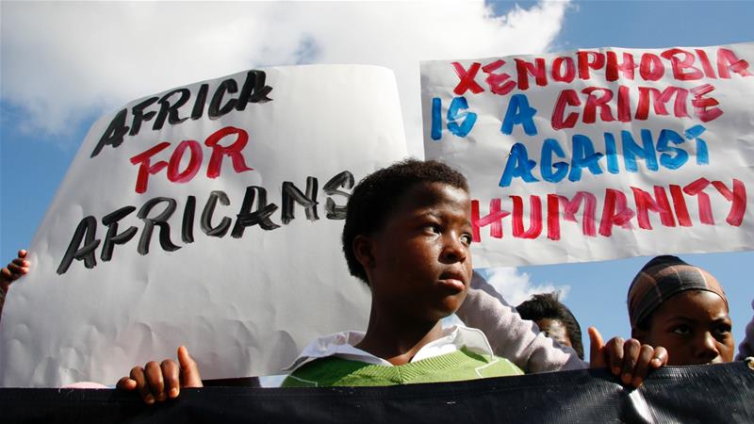 Demonstrators march against the wave of xenophobic attacks in Khayelitsha township near Cape Town, May 31, 2008 [File: Mark Wessels/Reuters]

Sleeping was not an option for Syed in early September last year.

For three days and night, the Bangladeshi shop owner in central Johannesburg said he had to stand guard to protect his store during an outbreak of xenophobic violence that saw rioters throw stones and other objects at him and other business people in the area.

Syed said the shopkeepers had called the police but they showed up only on the third day. By then, more than 1,000 Bangladeshi shops were looted, he added.

His account is one of the dozens included in a report released on Thursday by the Human Rights Watch (HRW), documenting mob attacks on migrant communities in South Africa by people who are angry at the dire economic and living conditions they are experiencing.

According to the findings in the HRW report, xenophobic harassment and violence against other Africans and Asians living in the country are routine and sometimes lethal.

Foreigners are scapegoated and blamed for economic insecurity, crime and government failures to deliver services, the report said. Non-South Africans are also being accused of stealing jobs and women, depleting the country’s basic services, spreading diseases and running crime syndicates.

“The xenophobic actions constitute a betrayal of the South African constitutional promise,” said Kristie Ueda, an HRW researcher and author of the report.

“The constitution promises human dignity and non-racialism. Non-nationals come to South Africa because there is this promise that they will be live freely and equality. But this idea has been betrayed,” she added, referring to the “overarching trend of indifference” towards victims of xenophobic incidents.

At least 12 people were killed and thousands displaced in a week of violence from September 2 to 9 when foreign-owned businesses were looted in different parts of Johannesburg. The rioting was accompanied by protests calling on foreigners to leave.

HRW said interviewees forwarded it WhatsApp texts and voice messages they had received in the days before the violence threatening it would become “deadly” and that “there will be fire and blood” if foreigners did not leave.

It was far from the first such incident in recent years. In 2017, violent anti-immigrant protests broke out in the capital, Pretoria, while in 2015, another wave of xenophobic attacks in different parts of the country killed several people and displaced thousands.

It permeates every layer of society creating a uniquely hostile society that does nothing but drive a wedge between the rest of the continent and South Africa.”

For its report, HRW interviewed 51 people including victims, lawyers and activists between March 2019 and March 2020 in the Western Cape, Gauteng and Kwazulu-Natal provinces, the areas hit the hardest by xenophobic violence since the end of apartheid in 1994 until 2018, according to the Xenowatch monitoring group.

Non-South Africans interviewed by HRW also said the government and law enforcement officials have used counterfeit goods and documentation raids as a cover for xenophobic harassment and attacks.

They believe their shops have been disproportionately targeted by authorities conducting raids, during which police have used tear gas and rubber bullets, according to the report.

Police would storm shops suspected of selling counterfeit goods with the goal of destroying or removing such goods from the market.

But while the government says such operations protect the local economy and jobs, shopkeepers and sellers in central Johannesburg told HRW that the police sold confiscated goods back to them after ransacking their shops.

Al Jazeera contacted the Department of Home Affairs for comment but has not received a response at the time of publication.

On January 14, Aaron Motsoaledi, health minister at the time and the current minister of home affairs, said, “We are not xenophobic as a department and as a country.”

The five-year plan’s goal is to improve the protection of foreigners and their access to justice, as well as raise public awareness and understanding of xenophobia.

The NAP recommends creating mechanisms to ensure foreigners receive services they are entitled to, facilitating their integration and embracing a humane and dignified approach to managing migrants, refugees and asylum seekers.

Still, xenophobic violence has continued in the first year of the plan’s existence.

“The NAP is more of a description of the problem with very broad and vague recommendations for anti-prejudice initiatives.

It’s not a series of programmes with budgets,” said Steven Gordon, a senior researcher at the Human Sciences Research Council (HSRC), decrying a “lack of measurable instruments that can be said to be implemented”.

Commenting on the HRW’s findings, Gordon said what is particularly striking is their similarity to the documentations included in a report released by the HRW back in 1998.

“Many of the issues are the same,” he said. “For example, the issue of government underplaying the problem and the problems faced by vulnerable migrants like refugees and asylum seekers as well as the institutional resistance from officeholders.”

Sharon Ekambaram, the head of the refugee and migrant rights programme at Lawyers for Human Rights (LHR), which runs walk-in law clinics for refugees and migrants in several cities, described South Africa’s asylum system as “failed”.

Ekambaram said over the past year the refugee reception office in Musina, a town in Limpopo province, had a 100 percent rejection rate of asylum seekers and of people seeking refugee status. “The quality of decision-making by officials is informed by xenophobia,” Ekambaram argued.

According to Ekambaram, xenophobic sentiments are increasingly spread through social media.

Certain statements by politicians have also exacerbated the problem, she said, referring to a November 2018 statement made by Motsoaledi that the South African health system is “overburdened” by foreign nationals.

“The government is in denial of the xenophobia in our country. It has to recognise that hatred of foreigners is being fuelled in communities. There has to be consequences for those who loot and attack,” she said.

Ueda, meanwhile, recommended urgent measures to improve the situation for foreigners. “One barrier to basic services is obtaining the right documentation.

The government should extend the validity of an asylum seeker permit to alleviate challenges foreigners face with the renewal of documents.”

Other HRW recommendations include the formal monitoring of the NAP’s implementation and the establishment of an accountability mechanism, as well the government acknowledging the existence of xenophobia in public statements.

DISCLAIMER: The Views, Comments, Opinions, Contributions and Statements made by Readers and Contributors on this platform do not necessarily represent the views or policy of Multimedia Group Limited.
Tags:
Bangladeshi
Black foreigners
South Africa
There will be blood
Xenophobia