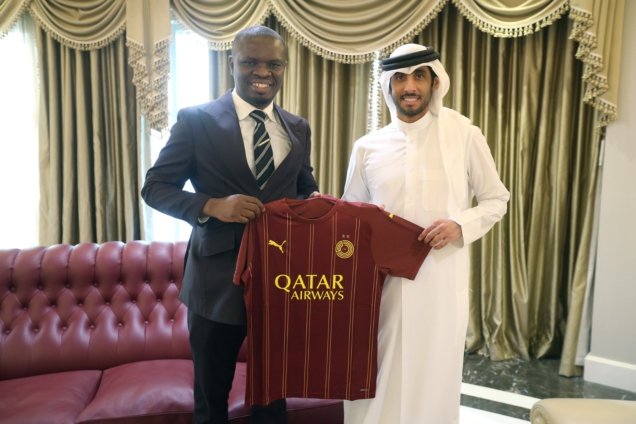 The Minister for Youth and Sports, Mustapha Ussif, has initiated steps for a cooperation agreement between some Ghanaian football clubs and their Qatari counterparts.

The Sports Minister, who was in Qatar for a three-day working visit, used his visit to make a case for a mutually beneficial partnership between Ghanaian clubs and clubs from the fast-rising, oil-rich Gulf nation.

At a meeting with the Chief Executive Officer (CEO) of Al Saad Football Club, Turki Al Ali in Doha during a visit to the club, Ussif tabled a proposal for a cooperation agreement between Qatar Football clubs and local Ghanaian teams – beginning with the biggest football club in Qatar, Al Saad, which employs Black Stars captain, Andre Ayew.

For a start, the Ghanaian Sports Minister proposed a partnership between Qatar’s most successful football club, Al Saad Football Club and a club in Ghana

The Alsaad boss welcomed the idea, adding that discussions should start at the governmental level between the two countries, and once the tone is set, his club and others could, as well as Ghanaian clubs could then join the discussion.

As part of the government-level engagements, the MP for Yagaba/Kubori constituency proposed that a technical team be sent to Qatar for in-depth deliberation in the coming weeks.

In a related issue the Minister and his Qatari counterpart, H.E. Salah bin Ghanim al-Ali also held discussions on broader issues of sports collaboration and development.