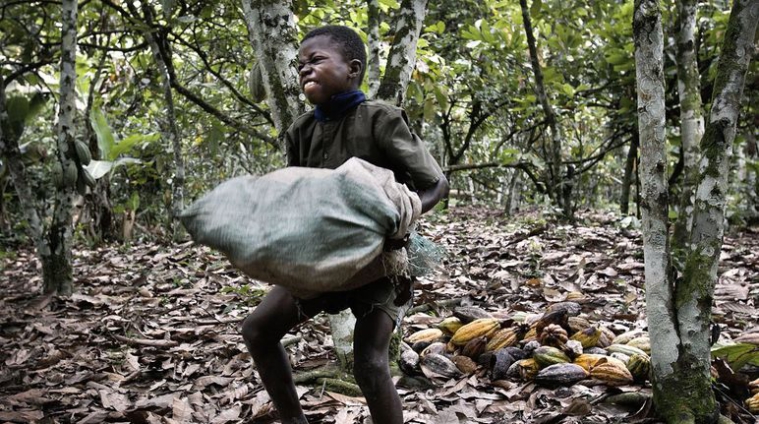 An assessment of the world’s biggest chocolate companies by over 30 international civil society groups shows that progress in the fight against child labour on cocoa farms is slow with an emphatic call on them “stop poisoning children to produce chocolate.”

The report indicated that while there had been improvements in many areas since last year’s survey, there was still a long way to go in addressing the issue of approximately 1.56 million children caught up in child labour.

This is in spite of repeated calls to address the issue and following a major academic study in 2020 revealing the scope of the problem.

“We are not at all surprised that a journalist found child labourers on farms allegedly supplying to Mondelez. Our concern is that we are not finding more of these children,” said Fuzz Kitto of Be Slavery Free, the Australia-based charity which coordinated the Chocolate Scorecard.

He observed that much of the child labour cases found in West Africa is the hazardous form of child labour, where a child is in danger through such things as carrying heavy loads, using dangerous equipment, such as machetes, or being exposed to chemicals.

“Every year the chocolate industry’s big players assure us that they’ll do something about child labour and the huge numbers of children being exposed to chemicals that burn their skin and affect their breathing. We say that progress is too slow and they have to stop poisoning children to produce chocolate,” Mr. Kitto added.

He pointed out that if companies start paying farmers properly, so they can get a living income, there would be fewer children forced to work in cocoa production and fewer farmers cutting corners with dangerous pesticides.

The Chocolate scorecard is an annual assessment of chocolate companies that provides a snapshot on how companies address farmers’ living income. The scorecard also shows the pace for adopting agroforestry and more climate-friendly farming practices where researchers rate the social and environmental impact of the companies that control global cocoa production.

The Chocolate Scorecard focuses on the production and supply chains that start in West Africa, where around 75% of the world’s cocoa is produced.

These account for 80-90% of global chocolate products, Easter eggs among them, and include giants such as Mars, Lindt, Nestlé, Mondelez (Cadbury), Ferrero and Hershey’s.

Ranking highly in ethical terms were US-based Alter Eco, Beyond Good, New Zealand based Whittaker’s and Tony’s Chocolonely from the Netherlands.

Only three businesses – Starbucks, General Mills and Storck, manufacturer of Werther’s Original – chose not to take part in the study, eschewing transparency and opting instead to conceal their practices.

The 38 companies were rated on the six most pressing sustainability issues facing the chocolate industry: traceability and transparency; living income policies; child labour; deforestation and climate; agroforestry; and agrichemical management.

This year Ferrero joins the list of companies, including Hershey’s, Fazer and Ritter, whose cocoa is close to 100% certified by the Rainforest Alliance or Fairtrade.

“While certification is not perfect,” says Fuzz Kitto, “it is often a positive first step in a company’s sustainability journey.”

Storck, Starbucks and General Mills were awarded the researchers’ “broken egg” for their continuing refusal to cooperate with The Chocolate Scorecard. Storck was given the worst rating overall and awarded this year’s rotten egg for a lack of transparency about its policies and practices in their cocoa supply chain, and in light of civil society complaints about the company.

“If they are making progress on increasing the sustainability of their chocolate supply chains then we and their customers and investors would like to hear about it.” says Kitto.

A positive the researchers found this year is the massive increase in commitment to cocoa production as part of an agroforestry system, whereby cocoa and other trees are grown together.

This system has many benefits, maintaining cocoa yields while helping farmers diversify – and restoring and improving local biodiversity at the same time.

Nestlé is notable for not only their 2021 distribution of over 1 million shade trees and a pledge for another million shade trees in 2022 in Côte d’Ivoire and Ghana but also a reforestation program to plant 20 million trees every year for the next 10 years in the area where it sources ingredients.

The annual survey and its dissemination is a collaboration between 29 organisations from around the world, including Australia’s Macquarie University and University of Wollongong, and the Open University (UK) as research partners, and not-for-profit groups.

“When faced with the issues surrounding child labour, individuals often feel overwhelmed by the problem and ask, ‘What can I realistically do?’

The Chocolate Scorecard is a brilliant way to help consumers choose wisely and eat chocolate this Easter with a clearer conscience,” says Andrew Wallis, CEO of Unseen.

DISCLAIMER: The Views, Comments, Opinions, Contributions and Statements made by Readers and Contributors on this platform do not necessarily represent the views or policy of Multimedia Group Limited.
Tags:
2022 Easter Chocolate Scorecard
Child Labour On Cocoa Farms
Easter