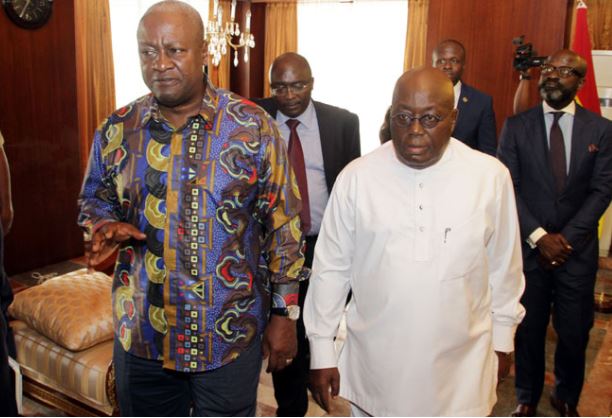 Former President John Dramani Mahama has called on President Akufo-Addo to take his responsibilities seriously and focus on working to change the circumstances of the Ghanaian populace.

In a Facebook post on Monday, the former President stated that rather than the “rabble-rousing skits” Ghanaians have been served, the President must “take his responsibilities seriously and focus on working to change the circumstances of our people.”

He was responding to comments by President Akufo- Addo on Saturday, December 18, while speaking at the NPP National Delegates Conference held in Kumasi..

The President challenged Mr. Mahama to show any of the policies the NDC party has suggested in its five years in opposition.

The comments made by the President, according to the Mr. Mahama were made because he, Akufo-Addo, has not read the NDC’s 2020 People’s manifesto.

Mr. Mahama explained that the opposition party has suggested the “Big Push” agenda meant to accelerate the infrastructure plan for the country as well as the free primary healthcare plan and the 1 million jobs agenda to be introduced by the National Democratic Congress when it assumes power.

This, he insisted should have been noticed by the President if he had read the manifesto.

“If only he took a moment, in the comfort of his chartered jet, to read the People’s manifesto, he would have at least learnt about the ‘Big Push’ (an accelerated infrastructure plan for Ghana), ‘Free Primary Health Care Plan’, the ‘1 million jobs plan’, ‘Ghana FIRST’ (Framework for Industrial Revitalisation, Support and Transformation) and several other well-thought-through and costed policies.”

Meanwhile, the former President has stated that he is willing to provide President Akufo-Addo an autographed copy of the manifesto to enable him learn about policies proposed by the NDC.

For him, the President has carved his niche as a good campaigner, but “a poor leader, as Ghanaians have found out at great cost.”