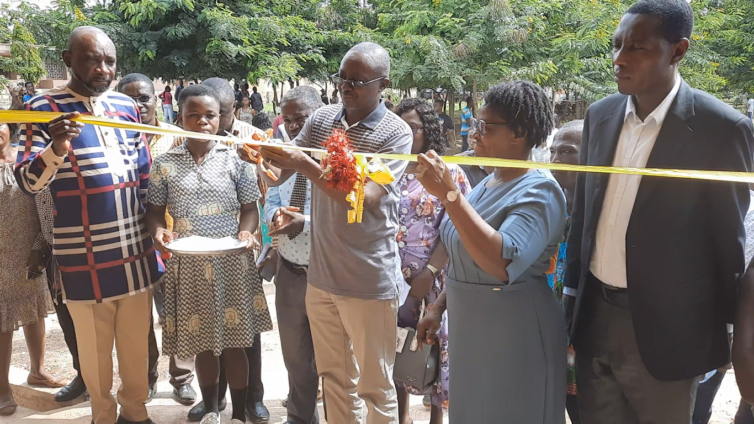 The Sunyani East Member of Parliament (MP), Kwasi Ameyaw-Cheremeh, has handed over two Classroom blocks to two schools in his constituency.

Pupils at the Police Experimental Primary School in Sunyani had a 2-unit Kindergarten block with a 4-seater WC, a shower, an office, a store, and a water reservoir, while a 3-unit classroom block for use at the Abesim SDA School.

The completion and handing over of the projects, which started in March 2021 and are funded by the MP’s common fund, are expected to improve teaching and learning in the schools in a conducive environment.

In his remarks ahead of the handing over, Kwasi Ameyaw-Cheremeh reiterated the importance of education for the development of the society and country at large.

“The future of Ghana is based on education. An educated farmer, mechanic, etc, can provide clean and effective services”, he stressed, and called on all stakeholders, including the government, to continue discharging their roles to ensure that no child is left behind and secure the future of the country.

He, however, urged everyone associated with the schools, especially the students, to ensure nothing is done to deface the structures and reduce their lifespan.

“The building looks beautiful today. We all have the experience of writing on school walls, but it’s a very bad habit. Teachers do not write on walls, but students do, so stop it and ensure that others also do not”, he told the students.

He averred that the lack of proper maintenance would lead to spending the already scarce resources on renovations instead of providing other infrastructures for all the schools in the municipality to enhance the quality of teaching and learning.

He also thanked the managers of the schools, the SDA church, and the Police Service for their cooperation that led to the contractor, Gyebeet Compay Limited –Kumasi, completing the projects on time.

Kwasi Ameyaw-Cheremeh also appreciated the efforts of the teachers, resulting in the academic successes of the students, a situation he said encourages him and others to strive hard to assist in the provision of more infrastructure for schools in the municipality.

The MCE of Sunyani, Ansu Kumi, on his part, encouraged the teachers not to sleep on their success but endeavor to achieve more to complement the effort of the government and the MP in access and infrastructural development in the schools.

He assured that the assembly would also continue to extend support to all the schools.

Bono Regional Police commander, DCOP Joseph Gyamera Oklu, in thanking the MP on behalf of the IGP, George Akuffo Damapre, also assured that not only will they continue to ensure discipline in the police school, but maintain the facility for the benefit of the students.

The headmistress of the Police School, Sunyani, Selina Boateng, appealed for further support to complete a 2-store building, started by the school’s Parent-Teacher Association, which, when completed, could accommodate close to a thousand students.

The Headmistress of Abesim SDA School, Hannah Agyei, also appealed for toilet facilities for both students and teachers, a football field and a borehole as they struggle to pay the exorbitant water bills.

The Sunyani Municipal Education Director, Mark Godfred Domah, expressed his outfit’s appreciation to the MP for his continuous vision of expanding the infrastructure base of many schools in the constituency.

He revealed that plans are far ahead to meet parents of all pupils in the municipality to discuss measures to boost teaching and learning.