Supporters’ stand at Gyeabour Park to be named after Augustine Okrah 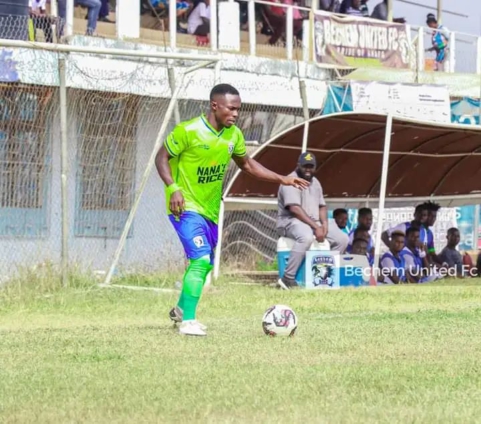 A ‘supporters’ stand at the Nana Fosu Gyeabour Park in Bechem will be named after “Legend” Augustine Okrah when ongoing minor improvement works at the facility are completed.

This was confirmed by the Communications Director of Bechem United, Emmanuel Gyasi.

The Ghana Premier League giants are currently using transfer proceeds from the sale of diminutive winger, Augustine Okrah, to renovate the ‘popular stand’ of the stadium in Bechem to raise its status ahead of the 2022/23 football season.

Okrah returned to his former Bechem United side before the commencement of the 2021/22 football season. He exhibited an excellent return at the club, scoring 14 goals in last season’s GPL while registering four goals in the MTN FA Cup.

His remarkable contribution for the Hunters last season steered them to a third-place finish in the league and a runners-up finish in the FA Cup as well.

Okrah then attracted interest from clubs in Ghana and other parts of the African continent, but Simba SC in Tanzania won the race to sign the former Al-Hilal striker on a two-year contract.

The 28-year-old was unveiled in front of 60,000 supporters on Monday in a spectacular atmosphere to the admiration of the player.

But the former Kotoko player is set to affirm his legendary status at Bechem United after the Ghana topflight side took a decision to honour him by naming a stand at their home ground after him.

Speaking in an interview with LUV FM, Communications Director of Bechem United, Emmanuel Gyasi revealed that Management of the club has taken a decision to use Okrah’s transfer profit to renovate the ‘popular stand’ at the Gyeabour Park.

“Augustine Okrah is a legend of the club,” he said. “For us as Management, due to the kind of performances that he has shown in his two stints at the club, we sold Augustine Okrah to Simba SC in Tanzania and Management have unanimously agreed to use the money received from that deal to renovate our popular stands”.

The club’s spokesperson said the President together with the stakeholders of the club will designate a stand to Augustine Okrah as a way of honoring their legend.

“So, when that renovation is done, the President and all other key stakeholders will ensure that the popular stand will be designated with the name Augustine Okrah.

“The reason for naming this popular stand after Augustine Okrah is to show appreciation for the kind of support and performance and everything that he has done for the club,” he added.