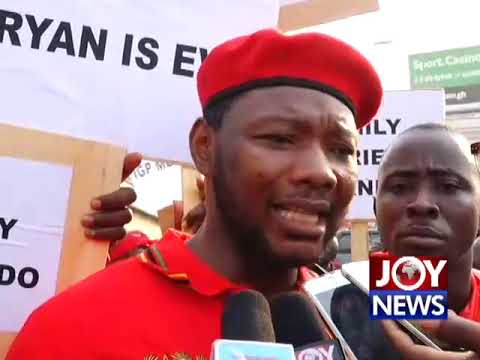 The Supreme Court has adjourned indefinitely the contempt application against Bernard A. Mornah, the Chairman of the People’s National Convention (PNC) because there was no proof of service on him.

Before adjourning the matter, the court subjected Bright Kuwornu, a Chief State Attorney (CSA) to a series of questions as to why Mornah had not been served to appear in court.

According to the court there was no indication on the case docket that Mornah has been served.

The panel further asked Mr Kuwornu whether the AG had also been served with an affidavit in opposition to the contempt application and whether he personally knew Mornah.

The court further demanded to know why after 25 days of filing the contempt application, the state with its numerous machinery had not taken steps to ensure that Mornah was served in such a serious matter.

In his response, Mr. Kuwornu admitted that he has not been served with any affidavit in opposition and he could not tell whether or not Mornah had been served.

The CSA in spite of the lack of service on the respondent wanted to move the application for contempt against Mornah contending that the PNC Chairman has been evading service on him by bailiffs.

“On what basis are you making those wild claims,” the SC, however quizzed.

The seven member panel then adjourned the matter indefinitely.

Mornah was cited for contempt after he allegedly encouraged Ghanaians to disregard a Supreme Court order for the Electoral Commission to compile a new voters’ register pursuant to C.I 126, which excluded the old voters’ ID cards as a basis for identification.

The PNC Chairman, who is the convener of a body styled as the Inter-Party Resistance Against the New Voters’ Register (IPRAN), is said to have called for a resistance against the decision of the EC to compile a new register for the 2020 presidential and parliamentary elections.

He reportedly called on Ghanaians to go out with their old voters’ cards “if it is the only form of identification they have and demand their right to be registered”.

The court on June 25, this year, affirmed the ECs independence in deciding not to accept the old voters’ cards and birth certificates as a proof of eligibility of an applicant for the compilation of the new voters’ register, which has since begun.

The panel presided over by the Chief Justice Kwasi Anin-Yeboah, in a unanimous decision, also ordered the EC to compile a new register pursuant to Constitutional Instrument 126 (C.I. 126), which was passed by Parliament.

The Court, subsequently, ordered all stakeholders and Ghanaians eligible to vote to comply with Articles 42 and 45 of the Constitution and C.I 126 for the exercise.

The Attorney General (AG), however, held that the comments by Mr. Mornah contradicted the expressed orders of the apex Court for the old cards to be excluded from the list of documents for identification.

The AG avers that Mornah, by that comments admonished Ghanaians to act in disobedience of the explicit orders of the Supreme Court of Ghana.

The AG, per this application is urging the Court to commit Mornah to prison to serve as a deterrent and also maintain trust and dignity in the highest court of the land.

Mr. Godfred Yeboah Dame, a Deputy Attorney General, avers that Mornah by virtue of his statement accused the Supreme Court of denying Ghanaians of their right to citizenship and their inalienable right, thereby courting contempt and disaffection for the court.

He said “the act by the respondent is calculated at bringing the authority of a court of competent jurisdiction into disrepute, and in the event, ultimately interfere with and obstruct the due administration of justice.

“The conduct of the respondent was clearly intended to subvert the judgment of this honourable court and same was out of disrespect for the court’s authority under the Constitution,” Mr. Dame stated.

He said “The respondent’s willful conduct, as aforesaid, was calculated at bringing the authority of a court of competent jurisdiction into disrepute, and in the event, ultimately interfere with and obstruct the due administration of justice.

“That respondent’s disregard of the authority of this court makes him liable to be committed to prison in order to vindicate the undoubted authority of the court”.