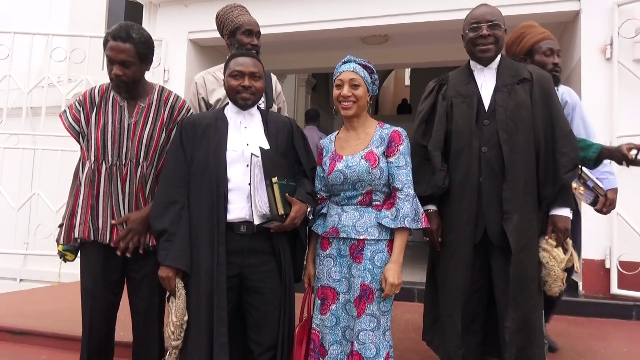 The Supreme Court has shot down an attempt by the Ghana National Farmers and Fishermen Association (GNAFF) to quash a recent High Court ruling in the ongoing GMO legal battle.

The highest court of the land ruled that the High Court was right in a May 2019 decision that it had the jurisdiction to continue hearing the case.

The original case has been pending at the High Court, Human Rights Division in Accra, since February 2015 when it was first filed by civil society group, Food Sovereignty Ghana, and three other groups.

They are seeking among others a declaration that ongoing processes by various government agencies to commercialise Genetically Modified Organisms (GMOs) are illegal.

According to court documents cited by Joy News, the plaintiffs are seeking a declaration that the government has not met the necessary legal requirements as contained in the National Biosafety Act 2011 to allow for the release and commercialization of GMOs.

GNAFF raised a number of objections before the High Court including a claim that the legal action is pre-mature because the Biosafety Act makes room for grievance settlement processes at the level of a board and appeal’s tribunal.

GNAFF says without exhausting those procedures, the High Court should not be entertaining the legal suit. But the High Court disagreed and ruled the case can proceed.

GNAFF then proceeded to the Supreme Court seeking to quash the High Court ruling but the justices of the highest court of the land backed the lower court’s position. Lawyer for GNAFF Bright Okyere-Adjekum subsequently withdrew the application even before the Supreme court could rule.

Dziwornu who represented GNAFF said after the ruling that, they will now go back to pursue the substantive case before the High Court. “I am happy. The Supreme Court judges are very fair. They have given us the opportunity to come up with issues in a way that no one will argue about it again…” he told the media.

He says despite the judgement not going in their favour, they are poised to return to the High Court to prove the judiciary has no businesses illegalizing ongoing plans to introduce GMOs in the country.

“It’s still in the process. I don’t see anything new from the Supreme Court ruling. We were in the High court already. We will go back to fight the real case there….And we will win a victory for farmers so they can grow GMOs,” Dziwornu noted.

Lawyer for Food Sovereignty Ghana (FSG) George Tetteh Wayoe is also confident Tuesday’s ruling is a sign of better days ahead for his side.

“We are happy about this ruling from the court. It boosts our case. It tells the world that the court of Ghana is ready to look at genetic engineering. Don’t let us belittle this action,” he told Joy News.

In their statement of claim dating back to 2015, the anti-GMO groups insisted ongoing processes to commercialise GMOs amount to a breach of the country’s laws saying government blatantly disregarded the Biosafety Act, 2011. It also claimed international biosafety protocols have also been breached.

FSG was joined by in their suit by Ghana’s third largest political party – the Convention People’s Party, the Vegetarian Association of Ghana and one other farmer group.

Four different government agencies including the biotechnology regulator, the National Biosafety Authority are defendants in the case. GNAFF was allowed by the court to join as defendants after they request to be included to champion the position of farmers.

The plaintiffs argued in court documents at the High Court cited by Joy News that there was no risk assessment before trials for the GMO crops which they say makes the process illegal.

They also claimed there were no appropriate structures when confined field trials of GMO crops started and so the crops will pollute and endanger the environment. They also claimed genetic engineering will seriously affect the food that members of the general public eat.

But GNAFF insisted in its counter statement of claim that GMOs have the vast potential of enhancing agricultural productivity and a decision to ban same will have an adverse impact on farmers and fishermen and by extension their economic and social rights.

The farmers say biotechnology as a tool for the enhancement of agricultural productivity is in consonance with Article 36 (2) of the 1992 constitution which enjoins the state to take appropriate measures to promote development of agriculture and industry.

Lawyer Tetteh Wayoe told Joy News they are in court because they are convinced GMOs are not good for the country. “Ghana should be grateful to the plaintiffs.

Posterity will judge us and tell us the steps are in order. If we sit in our country and technology is coming and all of us are sitting down, then we are not pro-active. But if a section of the people says no, we have a problem with it, then go to court, it is the way to go,” he said.

But Dziwornu says Ghana allowing in GMOs will be in the interest of the country and is cautioning against frustrating the processes. “Already, the structures are in place; we are doing field trials on rice and cowpea and cotton.

So we are fighting for farmers. There are national institutions doing the trials. We are not expecting big multinationals to come to take over our food sovereignty or our means of production,” he said.

“In Nigeria, they have advanced with the ongoing field works. So why can’t we do that? Are we going to stay aloof and allow others to take over our agriculture,” Dziwornu quizzed.

The parties are expected back at the High Court on Thursday as hearing of the substantive case resumes.

Former CPP Presidential Candidate Samia Nkrumah called on government to revoke the approval given for trials of GMO crops in the interest of the country.