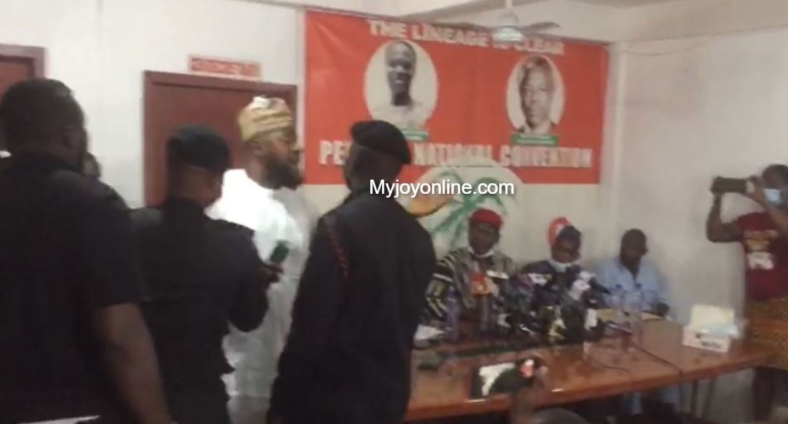 The Greater Accra Regional Chairman of the People’s National Convention (PNC), Bala Maikankan, has said that the purported suspension of the General Secretary, Janet Asana Nabla on August 28 by the National Chairman and some leaders of the party, is illegal.

According to him, despite claims by the leadership, the members present during the National Executive Council (NEC) meeting on the said day did not form a quorum to enable them take that decision.

Speaking on Top Story, on Wednesday, he stated that per the party’s constitution, at least half of the party’s regional chairmen should be present at the meeting, however, only six of them were present.

“Everybody knows that I am against the General Secretary from day one, because I wasn’t supporting her even at the time of her election, but this very one, what they did to take her out is illegal,” he said.

His comment comes after chaos erupted at a press conference organised by the PNC on Wednesday, September 1.

Bala Maikankan had stormed an ongoing press conference to demand explanation regarding the General Secretary’s suspension.

It took the efforts of the Police to calm tempers.

Opening up on why he disrupted the party’s press conference, Mr Maikankan told Evans Mensah on Joy FM that aside from his reservations about the NEC meeting, the party’s Communication’s Officer made some untrue statements about the General Secretary.

On allegations that she had embezzled party funds amounting to GHC30,000, he stated that those claims were false. Because, the money was distributed among regional chairmen and the rest left for activities like paying rent of party offices among others.

“It is true that GHC30,000 cedis was refunded by the EC. Her (Janet) complaint was that anytime she deposited money into the party’s account, the monies vanished without her consent. So she took the money and shared it among the regional chairmen, leaving the rest for the party offices.”

He revealed that there is currently a petition filed against the leader of the party, David Apasera for fraud and embezzlement.

“There is some money that we received somewhere, to pay for our party offices – that is GHC150,000. As we speak on the 28th of August GHC70,000 has been withdrawn from the account.”

“The next two days [after the withdrawal] was when they held their so-called NEC meeting. So what did they use that GHC70,000 for?”

DISCLAIMER: The Views, Comments, Opinions, Contributions and Statements made by Readers and Contributors on this platform do not necessarily represent the views or policy of Multimedia Group Limited.
Tags:
Bala Maikankan
Janet Asana Nabla
PNC