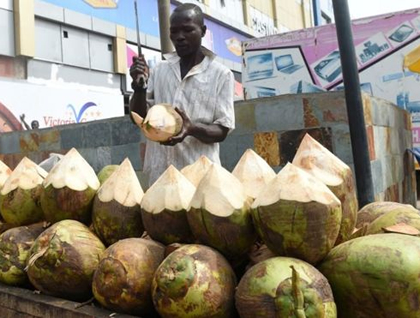 You wouldn’t guess that a fruit so synonymous with chill tropical climes could incite such a firestorm of nutritional controversy, but so it is with the lowly coconut.

Within the last decade or so, internet wellness “experts” have touted a flight of purported benefits inherent within the oil of coconuts. They argue that coconut oil is rich in fat and, specifically, medium-chain triglycerides (MCTs), which can do all kinds of wonderful things for your hair, nails, and overall health. Coconut oil and/or MCT oil can even help you lose weight, these people have argued.

And then there’s the other sector of nutritional society—the sector that has targeted coconut oil as a food to be avoided, at best, and a heart-attack-inducing edible, at worst. The American Heart Association cautions people away from coconut oil due to its high saturated fat content.

(Though, truth be told, they’ve been wrong about things before.) And way back in 2018 Karin Michels, a professor at the Harvard TH Chan School of Public Health, said that coconut oil not only has no proven health benefits, but is one of the “worst foods you can eat.”

Like many other foods and nutrients in the age of disinformation, these polarized viewpoints do very little to help you—the person just looking to figure out the best option to buy at the supermarket for your health.

That’s why we turned to trusted experts to determine whether or not coconut oil is good or bad for you. And the truth—surprise!—isn’t on either end of the coconut love-hate spectrum.

What is coconut oil?

Coconut oil contains fats known as medium-chain triglycerides (MCTs), which are metabolized differently than other types of fats (more on that later).

People mostly use coconut oil for cooking, particularly for high-heat cooking methods, such as stir-fry, popping popcorn, or making baked goods. You can even add it to drinks (you’ve probably seen it in a few bulletproof coffee recipes).

Does coconut oil have any proven health benefits?

Well, some people believe that coconut oil can help you lose weight.

“It’s been found to boost fat-burning and provide your body and brain with quick energy,” says Maggie Michalczyk, a Chicago-based registered dietitian. This was supported by a 2009 study in the journal Lipids, which showed that women who ate coconut oil over a 12-week period lost belly fat, while people who ate soybean oil did not. That said, the study is more than 10 years old and the results of female study participants don’t always translate to men.

But what is for sure is that coconut oil is full of MCTs, a type of fatty acid that is rapidly absorbed and converted into fuel for the body. “And 2014 study found that MCTs increased the hunger-regulating hormones in the body that make a person feel full, compared to long-chain fatty acids,” Michalczyk says. The idea is that coconut oil could potentially increase satiety to fill you up faster, so you’ll be less inclined to mindlessly snack later in the day.

But these claims should be taken with a grain of salt: research on the link between coconut oil and weight loss is scant, and not every study has replicated these results.

So keep in mind that adding coconut oil to your coffee is not going to help the pounds melt off you like magic.

OK, but is coconut oil bad for you?

The bulk of Michels’ argument against coconut oil is that it contains a lot of saturated fat, which in excess has been linked to increased LDL, or “bad,” cholesterol. But recent research has thrown longstanding claims about the dangers of saturated fat into question. Other factors, such as genetics and a history of smoking, are much more likely to increase your risk of heart attack or other cardiac events.

LaValle encourages coconut oil intake “in moderate amounts, like one tablespoon per day or less,” she says. If you want to cook with coconut oil, you should also opt for virgin coconut oil, which has not been subject to chemical processing.

Bottom line: coconut oil is probably fine for you in moderation, but it’s far from the superfood we’ve been led to believe it is. Feel free to try it, but don’t expect it to yield any magical health benefits.

DISCLAIMER: The Views, Comments, Opinions, Contributions and Statements made by Readers and Contributors on this platform do not necessarily represent the views or policy of Multimedia Group Limited.
Tags:
Coconut
Coconut Oil