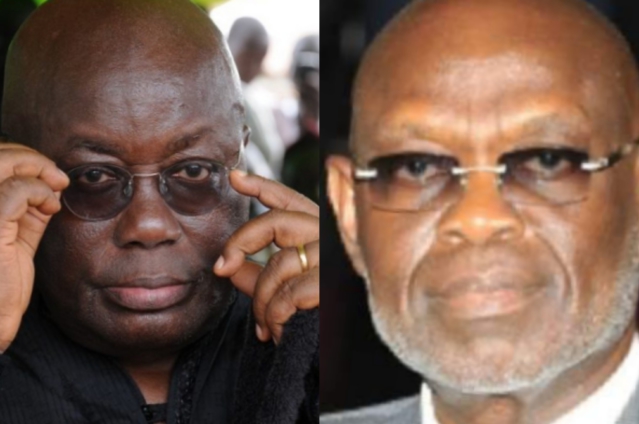 According to him, Kwesi Botchwey was his ‘good friend’, with whom he attended the University of Ghana together, back in the mid 60’s.

Recounting their days as contemporaries, he said Professor Botchwey was a dutiful public servant, who discharged his duties with ‘dignity’.

The President further extended his sympathies to the affected family, including Professor Botchwey’s NDC political fraternity.

“The thoughts and sympathies of my wife, Rebecca, the First Lady, and I are with his partner, children and family. I extend my deepest condolences to them, and also to the National Democratic Congress, of which he was a prominent and much respected member”, portions of the President’s post read.

The President said, “May his soul rest in perfect peace in the Bosom of the Almighty until the Last Day of the Resurrection when we shall all meet again. Amen!”.

Meanwhile, a former Finance Minister, Dr Kwabena Duffuor, has also expressed grief over the death of Professor Kwesi Botchwey who once served in the same capacity.

According to him, Kwesi Botchwey was both his colleague and friend, during their over ten years working relationship.

Expressing his sympathy in a Facebook post on Monday, he said the death of Professor Botchwey, is a great loss given his diligence and selflessness.

In his post, he stressed on some of Mr. Botchwey’s attributes and wished him a peaceful transition into eternity.

In an earlier tweet over the weekend, private legal practitioner, Gabby Otchere-Darko, also eulogised the late former Minister of Finance.

In his tweet, he said the deceased NDC cadre did remarkably well at the helm of the Finance Ministry.

According to him, Professor Botchwey’s deeds some decades ago, are still having impact currently.

Per unimpeachable sources, the erstwhile NDC appointee died after a short illness.

This sad incident reportedly happened at the Korle-Bu Teaching Hospital, where he was receiving treatment.

Prior to his demise, he was a key member of the Council of Elders of the National Democratic Congress, having played an integral role in the evolution of the NDC, from its PNDC era.

DISCLAIMER: The Views, Comments, Opinions, Contributions and Statements made by Readers and Contributors on this platform do not necessarily represent the views or policy of Multimedia Group Limited.
Tags:
Akufo-Addo
Death
NDC
Professor Kwesi Botchwey