The GFA do not interfere in call ups, that’s not what we do – Herny Asante 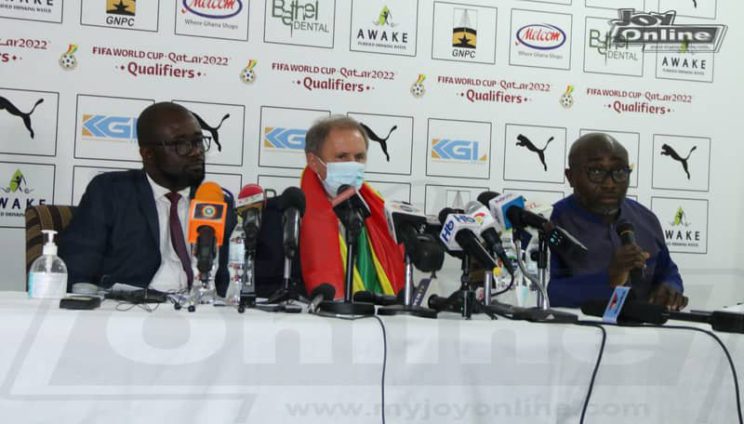 High-ranking members of the Ghana Football Association (GFA) have been plagued by incensed members of the local football community with accusations of using the national team for their personal interests.

Arguably, former Black Stars head coach, CK Akonnor, suffered most from the hands of Ghanaians for what was claimed as his inability to stand against political interference in his national team call-ups.

GFA president, Kurt Okraku came under public ridicule, due to claims of him forcing players down the throat Akonnor.

However in an earlier exclusive interview with Joy Sports, the association president denied the allegations, but revealed that national team invitations are filtered through an FA process.

“Nobody imposes players on Charles Akonnor. Call-ups for all national teams go through processes and these people [Ghanaians] must understand. Gone were those days where one person will wake up one day and there is a call-up. It will never happen again

“The coach and his team will work with the technical directorate to pick up a squad and if they are convinced about the squad, they need to convince the management of the team about the squad.

“Finally, there will always be a meeting, some I may attend or any other I pick to attend, and when there is a consensus the squad is announced by the head trainer. This is a system that is administered everywhere in the world,” Okraku said on the Joy Sports Link.

Akonnor was ultimately sacked for a streak of poor Black Stars performances. The appointment of Milovan Rajevac which amongst others, was aimed at resurrecting belief from Ghanaians in the team, has not exactly fulfilled its purpose. Some Ghanaians believe political interference from the GFA will defeat ambitions of the returning head coach.

“In 2010, when we were going to the World Cup in South Africa, I paid particular attention to all the teams we were going to face at the group stages. I placed premium on the preparation of Australia, Serbia and Germany.

“There was a particular name in the German squad, Lukas Podolski who was then playing for Arsenal. Lukas Podolski within a 24-month period had played only ten times for Germany and twelve times for his club and the German media felt he did not merit a call up. But Joachim Low said ‘look Oliver Bierhoff, you’re the team manager, Lothar Matthaus, you’re the technical director but I feel when it comes to commitment and people or players who can give their all to the national team, he is one that I can trust and so I want to take him to the World Cup.

“In that team he had a blend of young and old, at the end of the day he defended his squad, but it did not go without scrutiny, proper discussion, interrogation. That is not interference, it is because the FA wanted to behave as a responsible football association and they felt they had suggestions and opinions to offer, and it is the same thing we do here. So it has nothing to do with interference.

What do you hear? The FA put names in the squad and the coach cannot speak? No, it does not happen that way,” Twum said on Joy News’ ‘The Probe’.

At his unveiling, Milo made attempts at making assurances that all final decisions on his Black Stars invitations, will be taken by him.

“I’m ready to share ideas with management on call-ups to the national team but when it comes to the final decision, I will be the one to do that,” the 67-year-old said to the media.

The first Black Stars squad since Milo’s arrival, is set to be announced soon, with the Black Stars facing Zimbabwe on October 9.