The poverty of wealth - MyJoyOnline.com

The poverty of wealth 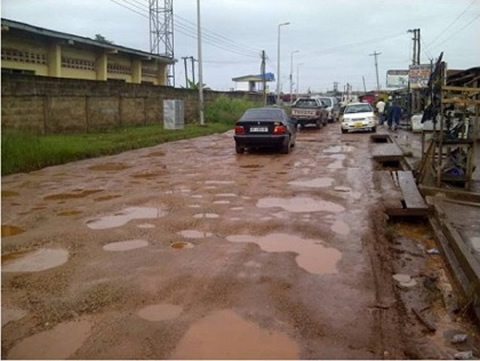 When was your last trip to Tarkwa? This old mining town is jam-packed with cars, buses, trucks and hawkers. It’s busy, but you can hardly move. It’s so extreme; I found out, that business owners cannot properly transport their wares and goods to the market centre in good time.

It's steaming hot in Tarkwa and the vehicle I'm travelling in hasn't moved a hundred metres in the last 30 minutes. The atmosphere is full of fumes from old engines forming its own cloud in the outer space. Trotro passengers must feel sticky and unduly exposed to the dangers of inhaling contaminated air, as they have no air conditioning's protection, but in the midst of the bustling, some passengers manage to sleep. Sachet water, fruits and fan products sellers are cashing in on the traffic.

After a while, I step out to check the cause of snail-pace movement of vehicles. I discover there is a bus terminal at either side of the road from where vehicles enter and exit the main road. Coupled with sellers and commuters crossing the road at every point, traffic on the single carriage Tarkwa to Bogoso highway is impeded. Thirty minutes later, I return to the vehicle I’m travelling in and the situation is the same, so I give up.

I enter one of the terminals to catch a cab to town. Here I meet Getty, who works at the new government hospital. I ask her about how the traffic situation in Tarkwa affects residents and she tells me poor planning is the cause of the current traffic mess.

“Tarkwa has traffic because of planning. When they were planning the town, they didn’t anticipate the population growing so rapidly. The stores have taken space for expanding the road, and the only way out is the low cost bypass. In case of an emergency, we are likely to lose the patient due to poor planning” Getty said.

The road to the health facility has both tarred and untarred sections, with many potholes on both. This further slows down the pace of vehicular movement. I enquired from Getty how widespread potholes are in Tarkwa.

“Tarkwa’s biggest problem is bad roads. All the roads have manholes not potholes. They have proper man holes” Getty said.

Some residents seem to have given up getting angry about it. However, commercial drivers are reluctant to go to various parts of the town citing potholes as their reason.

“The roads have too many potholes and in some cases, erosion has washed away portions of the road, especially the untarred sections”. Kojo, a taxi driver said.

Others blamed the slow pace of traffic in the mining town on spatial planning of Tarkwa.

“There is only one major road in town which is small because of poor demarcation” Jerry said.

Yet others think the assembly has failed them by not improving the road network in the mining town.

“Because of the mining activities in Tarkwa, if the assembly expands the road a bit, it will help” Nana Yaw said.

A business owner Joe Mensah, who had returned with wares from market, explains how the current state of the road frustrates his business.

At a taxi rank I find Robert Affum Fianko. He is the assembly member for Cyanide Electoral Area. He blames the situation on over politicization of development project.

“At times it becomes politics. When we decided to construct the main road, we should have demolished all houses that are along the original road. When the government decides to demolish the properties, we must all support it” Robert said.

As it stands now, it is clear that money is needed to improve the situation in and around Tarkwa. The assembly generates over 3.5 million Ghana Cedis per year from property rates as well as the mineral’s development fund. When I asked, Baabie Annan-Noonoo, the public relation’s officer of the assembly, how these monies are disbursed she would not reply, but referred me to the budget officer, who subsequently demanded an official request to enable him respond. This request is what led to being referred to him in the first place. In essence, my request has since not been fully answered.

Meanwhile community members struggle along and many suggestions float around to solve the problem. Some fruitless efforts were made by the assembly to ease the situation. An assembly official who spoke on a condition of anonymity explains that a new bus terminal was built to decongest the town in 2012. But commercial drivers abandoned the facility. They claim commuters failed to patronize the new terminal because it was far from the city center.

The community’s representative in Parliament Gifty Eugenia Kusi, says the road needs to be a dual carriage but due to lack of funds that hasn’t happened.

Tarkwa residents, including Getty, believe the situation will improve if government invested in the rail sector.

“The way to deal with the traffic situation is for government to rehabilitate the railway lines. Once the rail road comes on stream, it can facilitate the carting of resources from this area, leaving the roads for passenger vehicles.”

How can a town so endowed with natural resources be living in crass deprivation? Will the assembly’s decision to construct a bypass behind the university improve the traffic situation in Tarkwa? We will keep an eye on this.