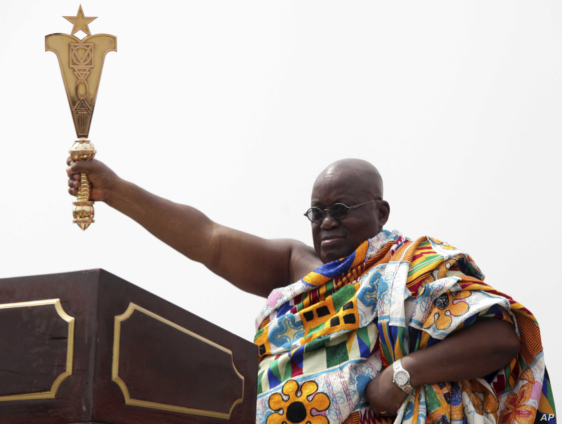 Nana Akufo-Addo during his inauguration ceremony in Accra, Ghana, on Saturday January 7, 2017.

Former President, John Dramani Mahama, says contrary to President Akufo-Addo’s promise to protect the public purse, the state’s resources have rather depleted under his watch.

According to the 2020 NDC flagbearer, Ghana has lost so much money in the Akufo-Addo era, due to the President’s failure to tackle corruption.

Addressing a gathering of chiefs and people at the 2022 edition of the Asogli Yam Festival in the Volta Region, he bemoaned the situation and expressed reservations about the current state of the economy.

He, therefore, pledged the NDC’s commitment to protecting the public purse.

“This government, the NPP government has completely lost control of the fight against corruption. President Akufo-Addo in his inaugural address promised to protect the public purse.

Today even, that public purse cannot be found. The revelations in the Auditor-General’s report for 2021 is simply a microcosm of the real extent of the seeming institutionalisation of corruption under this administration,” John Mahama said.

“As I said recently, I want to assure all Ghanaians that the next NDC administration, as I’ve recently said will revisit the matter of article 71 emoluments, especially the issue of ex-gratia payments and the size of government to cut down on expenditure as a way of protecting our scarce resources”, he added.

Mr Mahama’s comments follow a recent report by the Auditor-General which revealed how the state continues to lose huge sums of money due to corruption and other financial malfeasances.

A total of ¢17.4 billion in financial irregularities were flagged by the Auditor-General in its latest report submitted to Parliament for the 2021 financial year.

This represents a 36% rise compared to that of 2020, following an audit of the accounts of at least 101 institutions.

Meanwhile, scores of citizens are calling on the Auditor-General to take punitive actions against persons and institutions who were implicated in its recent findings.

According to the concerned stakeholders, this will deter others in the future.

For them, the Auditor-General must not only report the financial infractions but also surcharge those involved as provided in law.