The Village Bard: Protests in Nigeria are a Ghanaian concern; our President must tell the world so 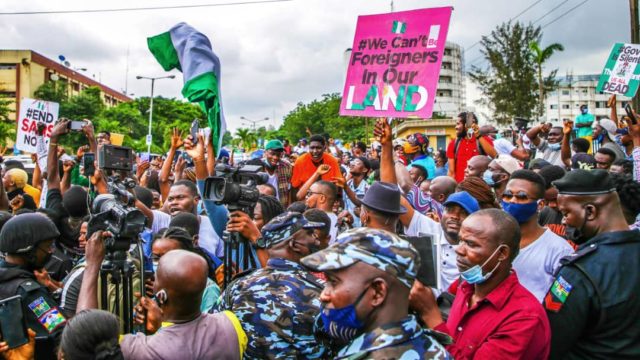 This is not a time for flowery language. There is no room for dialogical negotiation; no diplomatic oration; no rhetoric; no sound bites. The message is simple and it demands to be understood: Police brutality must end and it must end now.

Over the past week or so, many Ghanaians have had to endure the helplessness of feeling a rage that one does not have direct ownership of and having nowhere to put it. We watch as the events unfold in neighbouring Nigeria, as protests, initially aimed at a section of the Nigerian police force, reveal the impunity that extends across the entire force, and reaches past State governments into the highest levels of Nigeria’s federal government.

The scenes are horrific; the accounts, chilling. One would be unable to scroll past three posts on their social media timeline without seeing images of protestors or innocent bystanders wounded or dead as policemen shoot live rounds at will into the crowds. These have been peaceful protests; citizens exercising their constitutional right to organise and demonstrate against injustice and human rights abuses.

For years, young people in Nigeria have been profiled and harassed by the the Special Anti-Robbery Squad (SARS) of the Nigerian police force. According to several accounts, young people are arbitrarily stopped and searched for simply looking too wealthy. A former SARS Commander spoke on a television talks how and provided a damning glimpse into the inanity that frames the psyche of the typical SARS operative.

According to Mr. Vandefan James, who rose to the rank of Chief Superintendent before his retirement from the Nigerian police force, SARS officers are justified in their targeted profiling of young Nigerians who appeared too wealthy for what would be expected, given the economic situation that persists in Nigeria.

For Mr. Vandefan James and the men he used to command, a young person would be unlikely to own an iPhone or a nice car unless they were involved in (cyber) crime. So, they are searched and harassed and extorted, if they are lucky; arrested, disappeared or murdered, if they are not.

But why is this a Ghanaian problem?

Never mind the oft-repeated argument that there could be Ghanaians living in Nigeria who could be subject to this kind of treatment. Never mind the fact that Nigerian friends and neighbours have to worry about their families back home and how they may one day become victims.

Never mind common human decency and the pursuit of the aspirational ideal of fundamental human rights for all. Never mind any of that. Consider, however, the repercussions of an extended conflict as the rage invariably continues to fester and to boil over in West Africa’s largest nation.

Consider the potential economic impact on the Economic Community of West African States (ECOWAS) as one of its largest contributors stares at the possibility of large-scale civil unrest, which will, in turn, lead to economic challenges. Consider, while we are on the subject, the fact that the President of Ghana, who represents all of us in this capacity and whose actions, therein, reflect on us, is Chair of ECOWAS.

So far, however, as far as this event is concerned, there has been no action-or rather, perhaps, the announcement of any-from our President and Chair of ECOWAS. Expectations are not at all high.

The bare minimum, which we have come to associate with our President—the one thing we can all agree completely that he is really good at—is his ability to make hair-raising public statements on our behalf during important world events.

He was even present when George Floyd was murdered by police in America. He is yet to show up, however, as police murder peaceful protestors in Nigeria. This is extremely worrying, considering that he made a public statement expressing sadness (that Notre Dame caught a bit of fire) on behalf of the Ghanaian people, many of whom would have thought of a secondary school in Navrongo if they were asked what Notre Dame was.

Make no mistake. He would be well within his rights if he publicly condemned the acts of police brutality and the human rights abuses Nigerian State governments are currently overseeing. Several State governments have failed to protect the rights of their citizens to protest and have stood by while police shoot at protestors, make arbitrary arrests, and, in some cases, abduct citizens under questionable charges, handing out swift punishments without trial.

Several protestors have been detained without cause and have been denied access to legal representation, even though said representation has been offered immediately and freely. In one case, a young man, who was literally dragged into custody (as seen in a now viral video), was only released after the intervention of the Speaker of the Nigerian House of Representatives. One governor actually tweeted that the State Government has banned “all forms of protests”; protests that are guaranteed by the Nigerian constitution and several international charters on human rights.

These human rights—the right to peaceful demonstration, the right to fair trial, the right to life—are also safeguarded under ECOWAS’ Protocol A/SP1/12/01 on Democracy and Good Governance, which dictates an agreement for member states to uphold human rights and prescribes guidelines for sustaining democracies across the sub-region.

Under Article 19 of the Protocol, the role of the police and other security agencies is stated to be the maintenance of law and order and the protection of persons and their property. The police in Nigeria are doing neither. They are harming the people they are mandated to protect and confiscating/destroying their properties.

They are breaking the law and interfering with order by attacking civilians who are exercising their right to peaceful protests; another right that is guaranteed under Article 1(j) of the same Protocol.

The document, under its 45th Article, also prescribes a list of sanctions that ECOWAS may impose on a Member State “where there is massive violation of Human Rights.” While these sanctions are mere slaps on the wrist in the grand scheme of things, their provision is indicative of not just the authority of ECOWAS to publicly and officially condemn, as an absolute minimum, the human rights abuses occurring in Nigeria, but also the organisation’s obligation to do so.

ECOWAS must, at the very least, make a statement acknowledging the legitimacy of the Nigerian people’s anger and encourage the Nigerian government to take swift action in keeping its police force in check. The organisation’s Chair has a responsibility to take initiative and lead, considering his record of being a strong voice against injustice.

As Ghanaians, we must expect that, if our President can extend our regrets about the burning of a chapel in France, he can convey our anger when young peaceful protestors in Nigeria come under police fire.

DISCLAIMER: The Views, Comments, Opinions, Contributions and Statements made by Readers and Contributors on this platform do not necessarily represent the views or policy of Multimedia Group Limited.
Tags:
#EndSARS
Akufo-Addo
Ghana
Nigeria
Political Opinion