‘There are no hostages’ says the man defending R Kelly

Steve Greenberg loves being the underdog.

He’s talking about his career as a criminal defence lawyer in the US, where his most high-profile client is currently the singer R Kelly.

The star, best known for hits like I Believe I Can Fly and Ignition (Remix) is currently awaiting trial on 10 counts of sexually abuse, all of which he denies.

Mr Greenberg is determined to win.

“Losing every case hurts. No matter what the facts are, no matter who the person is, no matter how guilty they may be,” he tells BBC presenter Ben Zand in The Next Episode podcast.

“I’m happy defending anyone. I have defended serial child rapist killers. I have defended mass murderers. It is not my job to make a value judgment as to whether someone’s conduct is right or wrong morally.”

But when it comes to the singer, Mr Greenberg is sure of his client’s innocence. 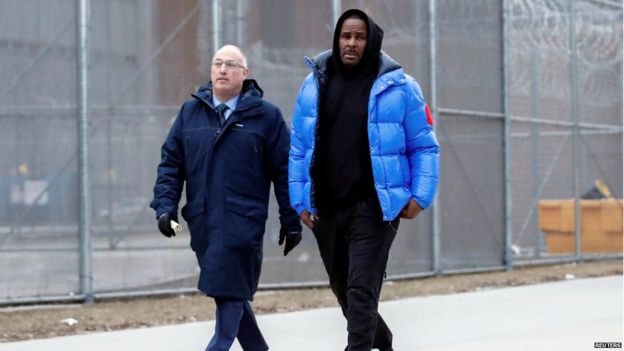 “It (Kelly’s upcoming trial) is going to end with a dismissal or a ‘not guilty’ verdict,” he says.

Kelly is accused of sexually abusing four women, three of whom were underage at the times of the alleged crimes.

One of the alleged victims was a teenage fan who tried to get the singer’s autograph during a previous trial in 2008.

Another is said to have met him at her 16th birthday party.

A third was his former hairdresser, Latina Carter.

And the accusations don’t stop there. Dozens of women have come forward over the years, claiming to have been abused by the singer.

But Mr Greenberg says the singer isn’t the man he’s being painted out to be.

“The R Kelly I know is a regular guy. You know, he lives in a regular condo in Trump Tower. He eats McDonald’s. He plays basketball. He smokes cigars at a cigar bar. He’s a pretty simple guy.

“I’ll tell you what, he’s awfully strong because I don’t know that I could stand up with all these accusations and not have a complete breakdown.”

According to the prosecution a major piece of evidence in the upcoming trial lies in a videotape. A recording that they say shows R Kelly having sex with a 14-year-old girl.

A similar tape was presented in the singer’s 2008 child pornography case. In that instance, Kelly’s defence team convinced the jury that the identity of the girl was not conclusive, and he was found not guilty.

“There is no new video out there. That is not correct,” Mr Greenberg says, despite American news network CNN claiming to have seen it.

“That is not a new or different video than the video that a jury decided was not R Kelly.”

The singer’s also been accused of holding women hostage in his home and operating a sex cult.

He denies this and two of the women allegedly being held against their will have appeared on US television defending the singer.

“I have been over to his condo. We’ve been reading, we’ve been talking about stuff. We decided we wanted to get something to eat. The two girls went out to Chipotle, down the street to get the food and bring it back.

What about the parents of one of the women, Joycelyn Savage, who insist their daughter has been cut off from the outside world?

“I have listened to Darrell (R Kelly’s publicist) and he is adamant, adamant that a meeting should take place.

“They should see their daughter. He’s conveyed the same message to the Savages. They want some meeting in some neutral site,” says Mr Greenberg.

Even with all the accusations, the growing number of victims coming forward and the promise of a new video tape, Mr Greenberg is sure his side will win.

But Mr Greenberg is looking forward to defending the singer when he goes back to court next week.

“This is what I do. This is what I wanted to do since I was a little kid. I want to defend people who are charged with serious crimes.”