EasyJet and Jet2.com have bought all of the take-off and landing slots owned by collapsed travel firm Thomas Cook in UK airports.

The slots at London Gatwick and Bristol were bought by EasyJet for £36m, the government’s liquidation service said.

Jet2.com has bought slots at Manchester, Birmingham and Stansted airports for an undisclosed amount.

The slots will expand the airline’s presence at each airport.

Gatwick says it is working with EasyJet to try out new ways to board passengers at the London airport.

These include boarding people in window seats first, starting at the back, followed by middle then aisle seats.

Gatwick said different boarding methods could reduce the journey from airport gate to seat by about 10%. 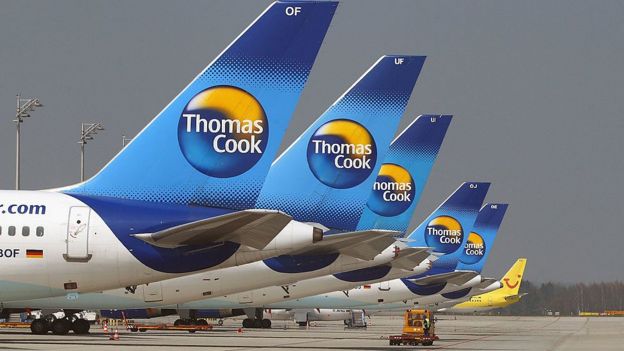 Take-off and landing slots can be highly sought after by carriers, as a lack of new runways in the UK has kept their supply low. In 2016, Oman Air paid $75m (£59m) for a single pair of slots at London Heathrow, according to The Times.

The independent travel agent said the move gave it shops in areas where it had little or no presence, including Scotland and Wales.

Thomas Cook’s Condor airline in Germany was rescued with the help of a loan from the German government.