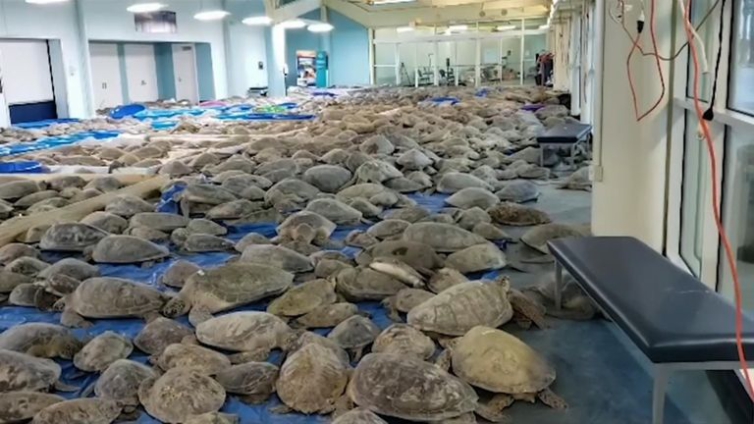 The winter storm that has hit Texas and other southern states in the US is also having a huge impact on wildlife in the area.

The freezing temperatures have been cold-stunning sea turtles, impacting their ability to swim or feed and resulting in a massive rescue mission to save them.

Thousands of the creatures have been taken to a convention centre in a South Texas resort by residents, some of whom lack heat or basic amenities in their own homes.

“Every 15 minutes or less there’s another truck or SUV that pulls up,” said Executive Director of the South Padre Island Convention and Visitors Bureau, Ed Caum.

Some people have been bringing in one or two sea turtles, others many more.

The convention centre which was without power or water until early Wednesday morning started receiving the turtles after its neighbour, Sea Turtle Inc, became overwhelmed with the numbers being brought in.

Mr Caum said they’ve “collected” more than 3,500 sea turtles so far. He said he hesitated to use the word rescued because “we know we’re going to lose some”.

And with another cold front on the way, he doesn’t know when the centre will be able to return the turtles to the water.

Now the centre has power again it has been able to bring the temperature to 15C (60F).

“We’re trying to do the best we can to save as many turtles as possible,” said Mr Caum.

Texas Parks and Wildlife Department Coastal Fisheries biologists and Texas Game Wardens are also rescuing and transporting sea turtles while it’s cold and plan to release them when it’s warmer.