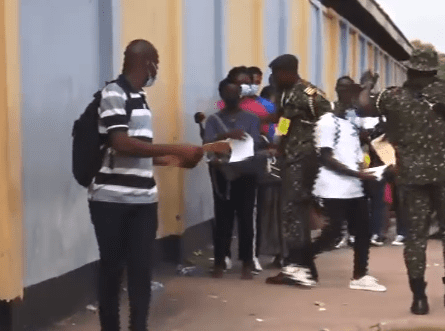 Thousands of Ghanaian youth thronged the El-Wak Sports Stadium in Accra on Monday for screening and subsequent recruitment into the Ghana Immigration Service (GIS).

According to the applicants, they arrived at the stadium as early as possible to avoid long queues and to get an early spot for the screening.

The Service has scheduled Monday to Wednesday as dates for the screening process across the country.

The long queue extended beyond the entrance of the stadium to the Lands Commission office near the cantonments Post Office.

The Head of Public Relations of the Ghana Immigration Service (GIS), Superintendent Michael Amoako-Atta, in an interview, said, “it is unfortunate that when they came in the morning, the gates were not opened, so you find them all outside. Now they are all being brought inside in an orderly manner for smooth screening.”

Mr Amoako-Atta emphasised that screening is essential for the service to verify the details of the information provided by the applicants on their online portals.

“The most important thing is that we want to be sure that the grades they entered into the system are the same grades that they have on their certificates.

“This is because they were alone with their machines, and they can put in whatever grades they want, but this is the time for us to do physical checks,” he said.

The exercise is the second phase of the recruitment process, and it is ongoing simultaneously at all other registration centres across the country, after which an aptitude test will be conducted for the selected applicants from the screening process.

The Service, on August 23, 2021, opened applications for Ghanaians to be enlisted into the service.