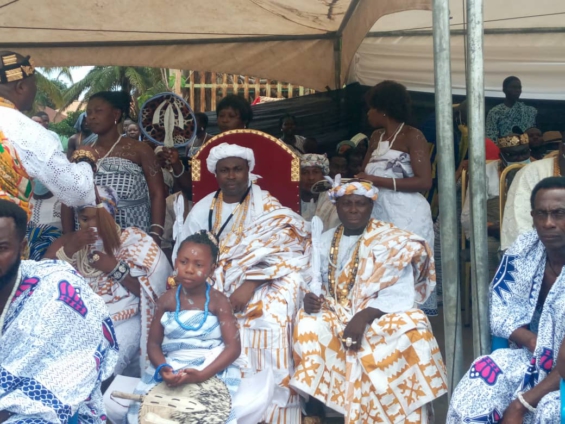 The Chiefs and people of Anlo Afiadenyigba the Keta Municipality have outdoored their Dufia (King) Torgbui Kadzahlo IV, other chiefs and the Mamaga of the area, Mamaga Dziwornu Able work II in a colourful ceremony.

The ceremony which was held in the main Anlo Afiadenyigba town aimed to promote the rich culture and tradition of the people.

The Dufia Torgbui Kadzahlo IV, in his speech, assured the people of the town to be a father of all and provide satisfying servant leadership, well embracing and encompassing.

“I will also ensure the rule of law and good governance will be the cardinal principles of my administration which means the rule of law will be applied equitably to all and sundry, including me,” Torgbui Kadzahlo IV said.

The Dufia noted that there is the need for the town, Anlo Afiadenyigba to be accorded the dignity and respect it deserves to strategically position it for tourist attractions.

He noted that, the environment must be well taken care of taking into consideration the dangers associated with environmental degradation, pollution of water bodies, inappropriate fishing methods and open defecation.

“Sometimes we hear of exhumation of dead bodies for rituals; such practices must cease henceforth and offenders of these practices, if found will be dealt with severely according to law, no will be shielded “Torgbui Kadzahlo IV warned.

Torgbui Kadzahlo IV, known in private life as Apostle Daniel Fly Kadzahlo however appealed to government to through the Volta Regional Minister to as a matter of urgency work on the road from Anlo-Afiadenyigba junction to the town through to Havedzi to make it motorable.

“Infact ,the deplorable state of the road is more than a death trap ” Torgbui lamented.

The Chairman for fundraising and finance Committee, and also President of the E.P University College, Prof Edem Kwasi Bakah noted that it was a great day to outdoor the King of the town especially when the stool before the outdooring remained vacant which greatly affected the progress and development as well as denied the people Good leadership required for development.

“Thankfully the kingmaker of the Royal Kadzahlo family have settled on an intelligent, visionary and progressive gentleman to lead the people of Anlo Afiadenyigba ” Prof Bakah noted.

The Chairman for the Anlo Afiadenyigba Development Council assured the Dufia of the association’s support at making his reign successful.

Chairman of the Anlo Afiadenyigba Youth Council, Bubu Klinogo noted the inability of the town to have a King deprived them of of the needed development and was happy that with the new King, thongs will fall in place in the positive directions.

MP for Keta who is an indigene, Dzudzorli Kwame Gakpey urged all to love in harmony with each other to have the needed development.

He assured them of his promise of lobbying for developmental projects and also make sure that the roads are constructed.

DISCLAIMER: The Views, Comments, Opinions, Contributions and Statements made by Readers and Contributors on this platform do not necessarily represent the views or policy of Multimedia Group Limited.
Tags:
Anlo Afiadenyigba
King
Torgbui Kadzahlo IV