Trump impeachment: White House aides can be made to testify

A federal judge has ruled that White House staff can be made to testify before Congress, rejecting the Trump administration’s claims of immunity.

The ruling specifically compels former White House counsel Don McGahn to testify to an inquiry into Russian interference in the 2016 US election.

But it also has major implications for the Democrat-led impeachment inquiry against President Donald Trump.

The Department of Justice says it will appeal the ruling.

The Trump administration has refused to cooperate with the impeachment inquiry and other Democrat-led investigations, directing current and former White House officials to defy subpoenas for testimony and documents.

Mr McGahn, who left his post in October 2018, was called to appear before the House Judiciary Committee in May to answer questions about the president’s attempts to impede the now-concluded Mueller investigation into Russian involvement in the 2016 presidential election.

But in her ruling, US District Judge Ketanji Brown Jackson said that “no one is above the law”.

“Executive branch officials are not absolutely immune from compulsory congressional process – no matter how many times the executive branch has asserted as much over the years – even if the president expressly directs such officials’ noncompliance,” she wrote.

Judge Jackson also explicitly said the president “does not have the power” to stop his aides from responding to subpoenas from Congress – adding that “presidents are not kings”.

“No one, not even the head of the Executive branch, is above the law,” Judge Jackson said.

But she did say that Mr McGahn could invoke executive privilege “where appropriate”, to protect potentially sensitive information.

Judiciary Committee chairman Jerrold Nadler said that he expects Mr McGahn to “follow his legal obligations and promptly appear before the Committee”.

Why is Congress investigating Trump?

Monday’s ruling could have an effect on who testifies during the current impeachment hearings in Congress.

Democrats may use it to summon figures such as former national security advisor John Bolton and Secretary of State Mike Pompeo.

The impeachment case centres on whether President Trump used the threat of withholding US military aid to pressure Ukraine into investigating a domestic political rival.

At the heart of the impeachment inquiry is a phone call on 25 July this year between Mr Trump and Ukraine’s newly elected president, Volodymyr Zelensky. 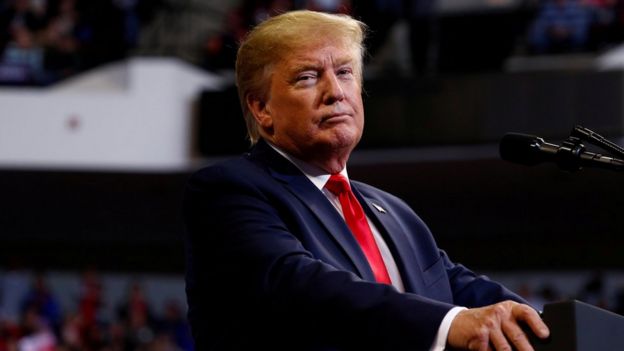 Mr Trump’s critics say this alleged political pressure on a vulnerable US ally amounted to abuse of power.

What next with the impeachment inquiry?

The Judiciary Committee is expected to begin drafting articles of impeachment – which are the charges of wrongdoing against the president – in early December.

After a vote in the Democratic-controlled House, a trial would be held in the Republican-run Senate.

If Mr Trump was convicted by a two-thirds majority – an outcome deemed highly unlikely – he would become the first US president to be removed from office through impeachment.

The White House and some Republicans want the trial to be limited to two weeks.