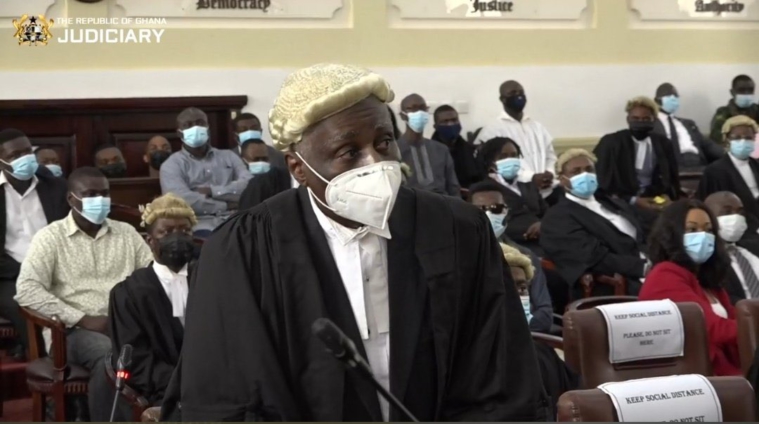 A leading member of the governing New Patriotic Party (NPP), Gabby Asare Otchere-Darko has enjoined Tsatsu Tsikata to admit to being outsmarted in the election petition hearing currently before the Supreme Court.

This follows a decision by the counsels for the 1st and 2nd Respondents not to call forth any witnesses to testify.

Lawyers for the Electoral Commission and President Akufo-Addo, cited Order 38, rule 3 (e) sub-rule 1 and 5 of CI 47 as amended by CI 87 as the basis for their decision to close their case and not call a witness.

Lead counsel for the EC, Justin Amenuvor, supporting his argument with Section 62 of the Evidence Act, told the apex court that his client cannot be compelled to testify against her will.

Also, lead counsel for President Akufo-Addo, Akoto Ampaw maintained that the burden of proof lies with the petitioner and not the respondents.

When you say the person declared as the winner did not win the election, it is for you to show to the court why. You do…

But Tsatsu Tsikata, lead counsel for the petitioner, John Mahama, had passionately objected to the submissions.

In his two-hour submission, Mr Tsikata explained that Jean Mensa, the EC Chair, had earlier indicated during the application for some interrogatories to be served that she was going to submit herself to cross-examination.

He argued that that was the basis for which the court took the decision to dismiss Mr Mahama’s application.

Again, Mr Tsikata told the apex court that the EC Chair also has a constitutional duty to give accounts of events that led to the December 9, 2020, election declarations and to clarify how some errors were made.

The arguments by the parties have since recieved support and counter-support on social media.

While many sided with the submission by Mr Tsikata that the EC Chair, Jean Mensa must mount the witness box, others held the opinion that witnesses cannot be compelled to testify.

Joining the social media debate, Mr Gabby Otchere Darko urged the petitioner’s counsel to admit to being outsmarted by the lawyers for the EC and Akufo-Addo.

According to him, one cannot allege and “expect the respondents to make your case for you if they opt to mount the witness box.”

“When you say the person declared as the winner did not win the election, it is for you to show to the court why.

“Calling of witnesses is an option which a party can choose not to exercise if indeed that party sees it as not necessary,” he wrote in a Facebook post.