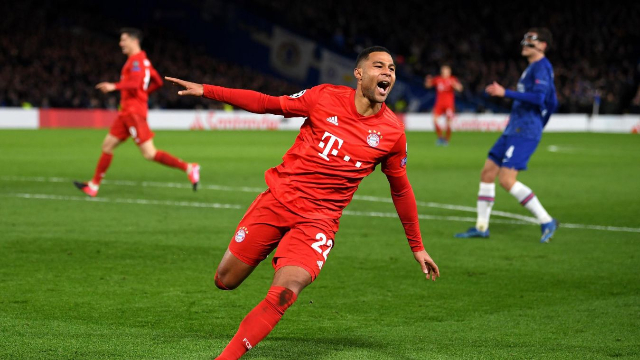 Chelsea were outclassed by Bayern Munich at Stamford Bridge on Tuesday, going down 3-0 in their Champions League last-16 first leg and lost defender Marcos Alonso to a red card for violent conduct.

Former Arsenal forward Serge Gnabry scored twice on his return to London for the Bundesliga champions as Bayern scored two well-worked goals in the space of three minutes shortly after half time.

Robert Lewandowski added the third and likely wrapped up the tie 15 minutes from time before ending up on the receiving end of a swinging elbow from Alonso minutes later.

Also, Napoli produced a defensive masterclass against Barcelona at Stadio San Paolo in the Champions League to secure a 1-1 draw in thier last-16 first-leg tie.

The hosts took a one-goal lead to the interval after a moment of inspiration from Dries Mertens, who whipped an effort into the top corner after a smart break from Gennaro Gattuso’s men.

However, Barcelona levelled the match early in the second half when Antoine Griezmann slotted home after a precise team move involving Sergio Busquets and Nelson Semedo.

Barca hopes of prising a winner against a resolute Napoli defence were dealt a blow when they lost Arturo Vidal to a sending off in the closing minutes after a coming together with Mario Rui.