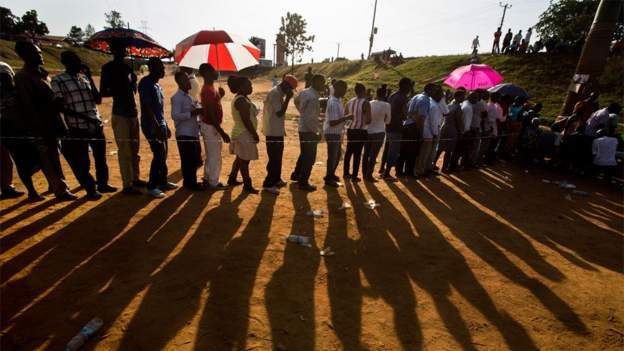 Polling stations have opened across Uganda for presidential and parliamentary elections, amid increasing tension and an internet shutdown.

Journalists in Uganda have been posting pictures and videos of queues at polling stations in the capital, Kampala, and across the country.

Polls opened at 07:00 local time (04:00GMT) and are scheduled to close at 16:00 (13:00GMT), although the election commission said all registered voters who will be in the queue by closing time will be allowed to cast their ballots.

Opposition presidential candidate Bobi Wine is expected to cast his vote at a polling station on the outskirts of Kampala.

President Yoweri Museveni will vote in his rural home in Western Uganda.

#UgandaDecides2021 voting just about to start at freedom Square polling station. Heard on radio that several other polling centres are yet to recieve voting materials @PMugoMugo pic.twitter.com/C5rsByLd7r

Some diplomatic missions have cast doubt over the electoral process, citing the arrest of opposition members during a campaign marred by violence.

They’ve also spoken against attacks on freedom of expression, after the government told internet providers to cut off their services.