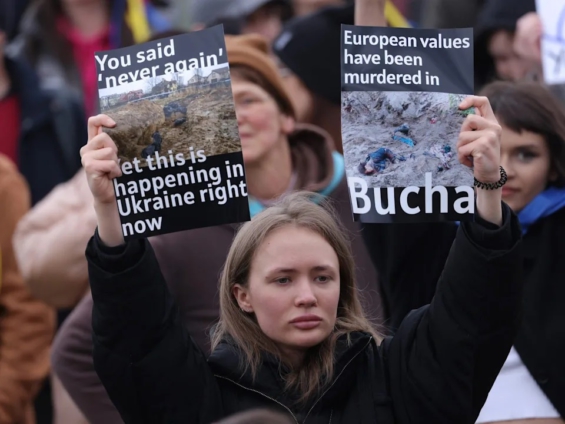 Ukrainian woman says Russian soldiers fatally shot her husband in the head after asking him for cigarettes: Amnesty report

A new Amnesty International report says Russian soldiers have extrajudicially executed civilians in Ukraine, based on interviews with over 20 people from villages and towns near Kyiv – including people who directly witnessed “horrifying violence committed by Russian forces.”

“We have gathered evidence that Russian forces have committed extrajudicial executions and other unlawful killings, which must be investigated as likely war crimes,” said Agnès Callamard, Secretary-General of Amnesty International.

“Testimonies show that unarmed civilians in Ukraine are being killed in their homes and streets in acts of unspeakable cruelty and shocking brutality,” Callamard added. “The intentional killing of civilians is a human rights violation and a war crime. These deaths must be thoroughly investigated, and those responsible must be prosecuted, including up the chain of command.”

A 46-year-old woman from the village of Bohdanivka, who was not named in the report for security reasons, told Amnesty that on the evening of March 9 she and other family members – her husband, 10-year-old daughter, and mother-in-law – heard shooting through their downstairs windows.

They shouted to the Russian troops that they were unarmed civilians, according to her account. After they came downstairs, two Russian soldiers who entered the house then pushed them into the boiler room.

“They forced us in and slammed the door. After just a minute they opened the door, they asked my husband if he had cigarettes. He said no, he hadn’t smoked for a couple of weeks. They shot him in his right arm. The other said, ‘finish him,’ and they shot him in the head,” she said.

She went on, “He didn’t die right away. From 9:30 pm to 4 am he was still breathing, though he wasn’t conscious. I begged him…’If you can hear me, please move your finger.’ He didn’t move his finger, but I put his hand on my knee and squeezed it. Blood was flowing out of him. When he took his last breath, I turned to my daughter and said, ‘It seems daddy has died.'”

A neighbor corroborated this account, telling Amnesty that he’d seen Russian forces break into the home and saw the husband’s body “slumped in the corner of the boiler room,” per the report. The woman and her daughter were able to leave the village, but the woman’s mother-in-law, 81, was unable to flee due to limited mobility.

Another woman, Kateryna Tkachova, 18, from the village of Vorzel, told Amnesty she heard Russian troops open fire on her unarmed parents on March 3 as she hid in the cellar. Tkachova said she saw tanks roll down her street marked with the letter Z, a symbol the Russian military has used to mark its vehicles in Ukraine.

“Once the tanks had passed by, I jumped over the fence to the neighbor’s house. I wanted to check if they’re alive. I looked over the fence and saw my mother lying on her back on one side of the road, and my father was face down on the other side of the street. I saw large holes in his coat. The next day I went to them. My father had six large holes in his back, my mother had a smaller hole in her chest,” Tkachova said.

Russia has been widely accused of committing war crimes in Ukraine. Earlier this week, President Joe Biden called for Russian President Vladimir Putin to be put on trial for war crimes.

“You may remember I got criticized for calling Putin a war criminal,” Biden told reporters on Monday. “Well the truth of the matter is, you saw what happened in Bucha…He is a war criminal. But we have to gather the information.”

It can take years to investigate and prosecute war crimes, and experts say it would be extremely difficult to bring Putin to trial and enforce any penalties.

Ukrainian President Volodymyr Zelenskyy accused Russia of genocide after it was discovered that hundreds of civilians were killed in the recently recaptured Kyiv suburb of Bucha.

Horrifying images emerged from Bucha, including corpses scattered in the streets and dead people with gunshot wounds and their hands tied behind their backs.

Russia denied any involvement in the Bucha massacre, while pushing conspiracy theories that the disturbing images of those killed were fabricated

DISCLAIMER: The Views, Comments, Opinions, Contributions and Statements made by Readers and Contributors on this platform do not necessarily represent the views or policy of Multimedia Group Limited.
Tags:
Civilians
Russian soldiers
Ukraine crisis