Ursula Owusu-Ekuful, Amewu, Godfred Dame and 2 others to reappear before Appointments Committee 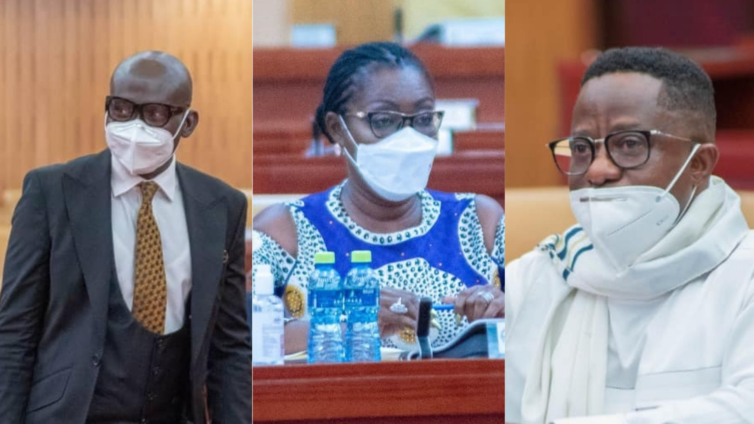 Five ministerial nominees out of the 30 so far vetted have been deferred by the Minority MPs on Parliament’s Appointments Committee to reappear for further questioning.

Mrs Ursula Owusu-Ekuful has been accused of being discriminatory in the closure of some radio stations.

The nominee during her vetting two weeks ago said the NCA acted in accordance with the Electronic Communication Law of 2008 in shutting down radio stations.

She stated, “Ursula has not closed down any radio station…it was by operation of the Law…the NCA conducted an audit exercise which indicated that 144 radio stations had committed several infractions which necessitated that they be sanctioned”.

Also, the NDC MPs cited flaws in her answers regarding the Kelni GVG CMP deal.

This Common Monitoring Platform (CMP) contract was set up with the objective of providing a means of verifying the information provided by telecom companies for tax revenue purposes in accordance with the law.

She, however, justified the implementation of the programme, claiming that it has helped the country to boost its tax collections from the sector.

The Hohoe MP, John Peter Amewu will also return to answer questions pertaining to the PDS contract and the beating up of a bailiff in his constituency.

During his vetting, Mr Amewu took responsibility for the botched PDS deal owing to the fact that he was sector Minister at the time.

However, he denied any involvement in the incident with the bailiff, claiming that he only found out a week after it had happened.

Roads and Highways Minister-designate who the president described as the most outstanding minister during his first term will also reappear before the Committee.

This is because he approved a $570 million motorway expansion project “without basis”, according to the NDC Parliamentarians.

Meanwhile, the Roads Ministry earlier this year rejected calls by the National Democratic Congress (NDC) Caucus in Parliament for the abrogation of the contract.

He disclosed in a statement that government undertook a transparent and competitive process between 2017 and 2020, using Public-Private Partnership (PPP) arrangements to select the contract after failed attempts by the previous NDC Government to procure the said works to another foreign contractor.

Godfred Dame who has been nominated as Attorney-General and Minister for Justice will have to return to provide clarity concerning 3 main issues.

For starters, the family of Gregory Afoko have petitioned the Committee against his appointment claiming that he was not truthful about the facts of the matter during his vetting.

Speaking at his vetting, he stated that the investigations by a committee from the Commission of Human Rights and Administrative Justice (CHRAJ) exonerated every member except for the former CEO Adjenim Boateng Adjei.

The 13-member minority on the Committee, however, say they have information that disputes his claim.

Lastly, Mr Dame while being vetted, denied his involvement in the prosecution of former Member of Parliament (MP) for Tamale Central, Inusah Fuseini over his comments after the 2020 general elections.

This will also be further scrutinized by the Committee at his second vetting.

Meanwhile, Health Minister Designate will also reappear before the Committee to answer more questions on the Frontiers Contract.

Mr Kwaku Agyeman-Manu disclosed during his vetting that the procurement of Frontier Healthcare Services, as the sole company testing all passengers who arrive at the Kotoka International Airport (KIA), was done by a presidential task force that reports directly to the President.

It was further revealed that the company was allowed to start its operations on September 1, and only procured its license nearly 2 months later on November 3.

In defence of the move, he stated: “In the pandemic, we had a phrase we are using that we were not in normal times.

“There were certain things that we had to do and try to rectify as we go forward because of the urgency of what we should do immediately”.

He too will have to answer more questions on the matter.