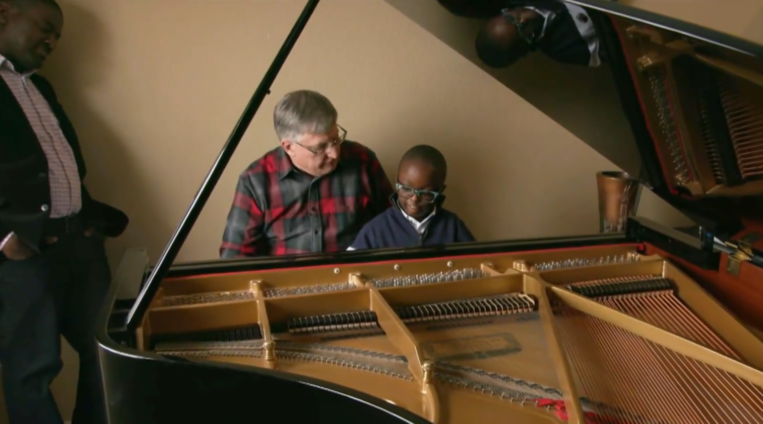 This On the Road report first appeared on the CBS Evening News.

The piano just showed up at Jude’s house one day.

“All for free,” said his father, Isaiah. “Who does that?”

Eleven-year-old Jude Kofie, of Aurora, Colorado, demonstrated a remarkable talent no one anticipated when he discovered an old keyboard and, without any lessons, began playing – a talent piano tuner Bill Magnusson termed “Mozart level.” https://t.co/njxydT6djB pic.twitter.com/0BV18zLchE

To understand how we got here, we have to go back a year-and-a-half, when Isaiah heard a noise coming from the basement. There was an old keyboard down there, but no one knew how to play it, certainly not his autistic son — or so he thought.

Jude had never had a lesson. No one taught him how to play. But Isaiah got Jude a larger keyboard to see what more he could do.

“It’s a miracle,” Jude said of his musical talents.

“That’s what I prefer,” Jude responded.

Bill Magnusson prefers that, too.

Magnusson is a piano tuner. He saw a story by a Denver TV station about Jude and heard him play. He learned Jude’s parents immigrated from Ghana and were raising four children, as well as sending money back home to their family in Ghana.

“What resources are left over to help this special little soul?” Magnusson said.

Using his father’s inheritance, Magnusson bought a $15,000 piano — estimated to be worth $45,000 — and promised to tune it once a month for the rest of his life. He’s also paying for Jude to get professional lessons.

The Kofie family is thankful.

“Somebody to just love your son like that by making sure that his future is secured, we are super thankful,” Isaiah said.

DISCLAIMER: The Views, Comments, Opinions, Contributions and Statements made by Readers and Contributors on this platform do not necessarily represent the views or policy of Multimedia Group Limited.
Tags:
Autism
Gift
Piano