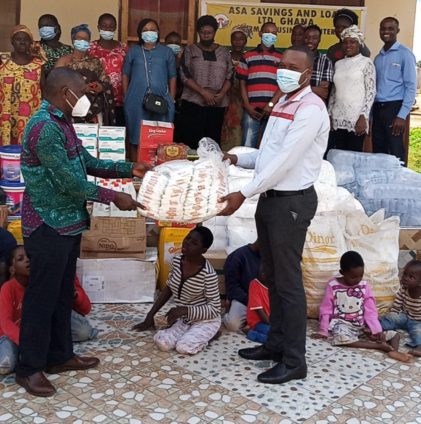 ASA Savings & Loans has made a donation to Cosmos Centre, a specialised children’s home located at Dormaa-Ahenkro in the Bono Region.

The donation to the special children’s home is the second time the Savings and Loans Company has extended a helping hand to the home.

In July 2019, the financial institution made a similar donation to the tune of GH₵5,500 to help the centre to continue running.

For this year’s donation, ASA Savings & Loans has presented items estimated to cost over GH₵7,000.

The assorted items expected to come in handy for 19 autistic children at the centre is made up of five bags of rice and three 25-litre gallons of cooking oil.

Other items include five cartons of milk, boxes of tomato paste, as well as soft drinks, packs of sachet water, hand sanitizers and nose masks among others.

Presenting the items to the Cosmos Centre, Seth Morgan Arhin who is the Sunyani Area Manager for the company said the donation is in line with his outfit’s corporate social responsibility.

He said they are always looking at giving back to society especially people and organisations that fall in the underprivileged bracket.

According to him, the gesture at the centre will not be the end but additional donations will be replicated in other parts of the country until 2021 ends.

On his part, the Manager of Cosmos Centre, Mr. Owusu Sekyere expressed appreciation to the financial institution after receiving the donation.

He stressed that “the donation will boost the morale of the children as well as the caretakers.”

Mr. Owusu Sekyere in an appeal called on corporate Ghana and Ghanaians with the resources to follow in the footsteps of ASA Savings and Loans to help give children with autism at the centre the needed care.

He noted that already, there are 30 children on the waiting list of the centre who have not been admitted because of the lack of resources.

The Manager of Cosmos Centre noted that if more support comes in, the centre will be able to take care of more autistic children.